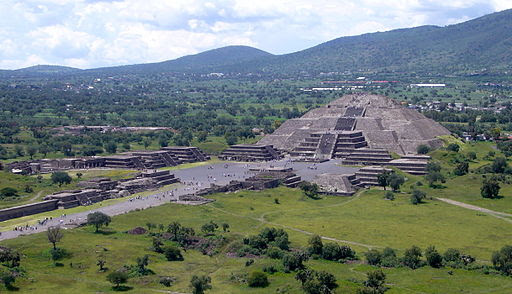 Dipping in and out of sleep
like a duck grazing under ruffled water,
nodding back and forth
in the space between two worlds.
A line beneath two dots is the number seven;
a wall of stone skulls records the passing of years.
Down twining runs of brick the effluvium of a great city
circles outward and away.
Snakes and feathers
are beauty and eternity.
Circles are mountains, and
the serpent’s head may speak
when the fires burn again.
A square headed figure like a bench
holds in thick fingers
a bowl for the god to drink
a sip of blood.
Skulls ridiculous and grave,
skulls to make Hamlet think again,
skulls mounted on rods
for storage.
Skulls crushed and painstakingly reassembled
for our edification.
All empty bottles, bent cans,
rotting in the great temporal gutter.
The gods are not upright
but crouched like stumps,
fat half-melted beings immutable and complex,
full of killing detail and dangerous eyes.
One can offend them merely by living,
leaving only one recourse.

Teotihuacan "..is an enormous archaeological site in the Basin of Mexico, just 30 miles northeast of Mexico City, containing some of the largest pyramidal structures built in the pre-Columbian Americas. Apart from the pyramidal structures, Teotihuacan is also known for its large residential complexes, the Avenue of the Dead, and numerous colorful, well-preserved murals..The city is thought to have been established around 100 BC and...may have lasted until sometime between the 7th and 8th centuries AD. At its zenith, perhaps in the first half of the 1st millennium AD, Teotihuacan was the largest city in the pre-Columbian Americas. At this time it may have had more than 200,000 inhabitants, placing it among the largest cities of the world in this period..."~wikipedia

Header photo: Pyramid of the Moon at Teotihuacan, Mexico,
By Gorgo  [Public domain], via Wikimedia Commons
Posted by hedgewitch at 8:41 PM