Off the Shelf Archive - November #3

This ironic little study on the vagaries of government and society by Finnish post-modern poet Pentti Saarikoski now goes into the archive to make room for an indulgence on my part. Probably one of the three most seminal poems to my own worldview, this may not be the best poem Wallace Stevens ever wrote (that would be 13 Ways of Looking at a Blackbird, in my very humble opinion) or the most anthologized, but remains my personal favorite. So without further ado, his poem of transition, life, lust, hate, disgust, love, and survival, Farewell to Florida. (Bear with me, the dark winter's just around the corner, and nothing could go along with it more fittingly.)

As with all the Off the Shelf selections, feel free to comment on either of these poems in this post here in the main stream since comments are disabled on the actual page, and also feel free to recommend a poet you'd like to see in Off the Shelf next time. I'm thinking it's time for a woman. 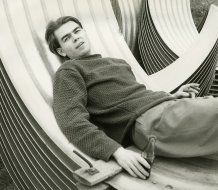 Translated from the Finnish by Anselm Hollo

Penttii Saarikovski was a Finnish poet, translator, bohemian, political activist and enfant terrible of Finland's literary landscape during the  Sixties and Seventies. You can find some information about his life and times here in his wikipedia entry  and also here.This poem is taken from the second entry in his Trilogy, Invitation to the Dance (1980) which represents some of his last published work.

Posted by hedgewitch at 4:35 PM

Email ThisBlogThis!Share to TwitterShare to FacebookShare to Pinterest
Labels: 2010, off the shelf archive, Saarikoski, wallace stevens