Off the Shelf Archive - February #1

February is well on its way, and the Archivist bestirs herself, finally. I've picked a rather well-known poem this time, from Irish poet and dramatist William Butler Yeats (1865-1939), because for one, it's a very fine poem, and secondarily, I'm currently working with the form of which it is one of the prime examples in English. It's always humbling to see a form that is driving you to cross-eyed mania executed with perfect poise, and Yeats definitely humbles me thoroughly with this selection, Sailing to Byzantium. The poem is built from four stanzas in the ottava rima form, and deals with the subject of age and the mind, and how to remain spiritually and intellectually alive. It was written in 1928, when Yeats was about 60.
For those who've read it, I think it's worth a re-read; for those who haven't, it's  not my favorite poem by Yeats (that would be When You Are Old) or his most accessible, but it's rather one of a kind.
You can find it here, in the second Off the Shelf Archive for February.
The previous selection consists of two short poems by the 20th Century American poet,  Richard Brautigan and is rolled out here for a last look.

As always, feel free to comment on either poem here, as comments are disabled off the main page. Suggestions for the next selection are always welcome, also. 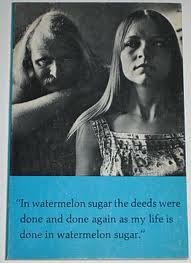 
2.
Find a place to sleep where it is quiet,
and sleep there.


3.
Reduce intellectual and emotional noise
until you arrive at the silence of yourself,
and listen to it.
II.
Hinged to Forgetfulness Like a Door
Hinged to forgetfulness
like a door,
she slowly closed out of
sight,
and she was the woman I loved,
but too many times she slept like
a mechanical deer in my caresses,
and I ached in the metal silence
of her dreams.
Richard Brautigan
Image: Cover art, In Watermelon Sugar, By Richard Brautigan
Posted by hedgewitch at 2:51 AM

Email ThisBlogThis!Share to TwitterShare to FacebookShare to Pinterest
Labels: 2011, brautigan, off the shelf archive, yeats