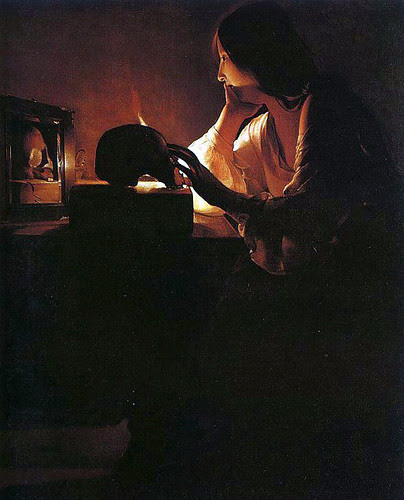 Witch’s Candle
I sent my heart, a candle in a paper boat,
sailing out on a white-rimed onyx sea

by the witchlight of a failing auburn moon.
At morning’s crackling burn she returned to me,
finding nowhere any berth or port of rest,
and this is all the tale that she confessed:
“I sailed at first quite blind," her low voice murmured,
“Nothing moved on the silent water’s face
except for my own shadow cast before me.
Then towards midnight, waves began to race.
The paper boat leaned to the blackened sea
as if the circling atoms sang beneath me.
"A  basilisk blue, a serpentine ocean's child
brought its face upturned to split the waters,
slicked with scales of turquoise demi-moons,
natron flame for eyes, black doves for daughters.
It seemed to want to eat me, piping tunes
on an easy azure tongue that danced the dawn,
but it tired of my taste, and I sailed on.
“Then,” said my heart, “ I came to a speck of land.
The paper boat shook out its weary folds,
for what’s so white and thin’s not meant to last,
not nearly last as long as what it holds,
and I was growing heavier with the tides,
but lava lapped the land's membranous sides.
“My own flame paled, lightning of a blinking insect
beside the heat that island caused to flood.
Red rock ran incandescent from the puncture,
a  hissing mouth that spit the worldcore’s blood
and brought its floating lips to my boat’s height,
kissing its creases crisp in the fire’s bite.
“The eagle of four corners stooped above me,
and pierced me on his running ruby claws.
He carried me for twenty leagues untiring.
I watched the obsidian sea and learned its laws.
I saw a million such as I, chained frozen, alone,
or sailing still but dead as a fossil's bone.
“I begged the bird to teach me how to fly.
Instead, he dipped his wing on a downward turn.
He loosed his grip; I dropped, my flame blown out.
So three times turned away, here I return.”
There bottomed in the bright aurora of dawn,
I took her back, so broken and so sore,
called her my one candle, light and life,
and swore to send her sailing out no more.

July 2011
Posted for    OneShotWednesday   at the inimitable OneStopPoetry
Image: The Repentant Magdelen, by Georges de la Tour, ca 1628-45, oil on canvas
posted on flickr by mpt1607
Posted by hedgewitch at 2:00 PM