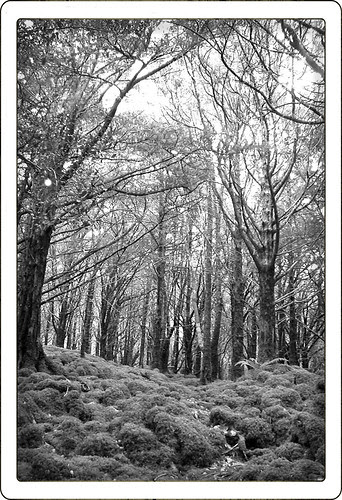 Asteria
All sun's length she sits
nested high in the world tree
alone, surrounded by
the howling, blue
painted greenwitch
oracle of the ward songs
in her iceglass
barelimb chapel
keeping vigil.
At night when the moon
hangs heavy and hunger
sings to the tides,
she flirts her feathers down to
probe the chambered nautilus
and fetch the glitterfish
called to her
rattling net hung
with bone charms.
She's felt his questions
pressing on her
all day so heavy
the singing
so heavy for something
made of air
the sword unsheathed
so red cutting from
the southern ocean’s rim.
She can hear him reading
from the old gods’ psalter
feel the sigh as the pages
slip to almost dawn,
till he finds
the leaf forgotten,
the star fallen
just before
the world ends
and the kingfisher flies.
June 2011
revised August 2011
Asteria was the name given, variously to: " the Titan of nocturnal oracles and falling stars," and mother of Hecate, "the ninth Amazon killed by Herakles when he came for Hippolyte's girdle,"  "one of the Danaids...who, with one exception, murdered their husbands on their wedding nights.." and "..one of the Alkyonides [who, after Herakles slew their father] along with her sisters...flung herself into the sea and was transformed into a kingfisher.."  ~wikipedia
All in all, a name with plenty of room for poetic interpretation.

Image: ireland's fangorn(Yew woodlands at the Killarney National Park, which is located beside the town of Killarney, County Kerry, Ireland,) by Justin Gaurav Murgai
Justin Gaurov Murgai's photostream
Shared under a Creative Commons 2.0 Generic License
Posted by hedgewitch at 1:02 AM