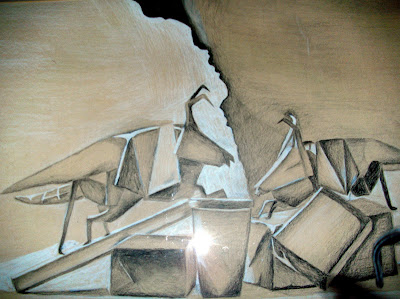 The Fortune Teller
A roundel in the rough
The cricket knows who’ll take the flag and bleed out in the sand
which one tells as many lies a day as the melon's black seeds
who’ll marry her love at last to find he's a red-eyed Caliban;
The cricket knows.
The cricket‘s dead antennae twitch the word from the yellow weeds.
I hear his dessicated legs push out the code, a one ghost band.
His deathsong chirps through the lacy curtains, then recedes
bowing of birth and murder, plagues of blindness on the land.
We have no secrets he and I, in the brainbowl where he feeds.
I re-bury him each day, each night he burns me like a brand.
The cricket knows.
October 2011
Posted for   OpenLinkNight   at dVerse Poets Pub


This is my attempt at a roundel, a form created  by the English poet,
Algernon Charles Swinburne.
Rhyme scheme is ABAR BAB ABAR. The refrain (R) consists of the first four syllables of the first line, and may or may not rhyme with the B lines. Each main line should have the same number of syllables, or possibly stresses, but Swinburne appears not to have paid much attention to that aspect in his own work, so I haven’t either


Image: Still Life with Origami Figures, original charcoal drawing,
© All Rights Reserved. This artwork is exempt from the Creative Commons 3.0 license in effect for the rest of the blog and may not be reused or reproduced without written permission.
Posted by hedgewitch at 1:00 PM