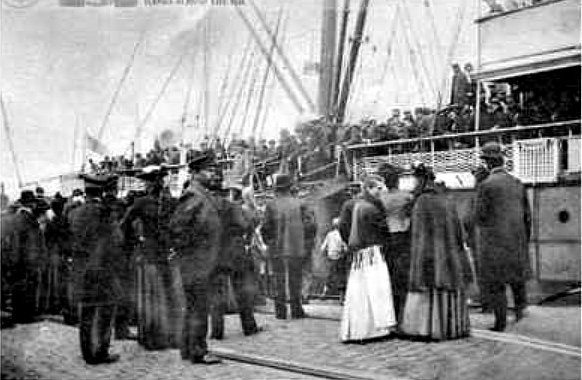 Immigrant
In the year 1900, Chicago was the city with the second highest number of Swedes after Stockholm, the capital of Sweden.~wikipedia
A hundred years ago
he stands on the quay
small in his winter clothes
the boy bruised with
old men’s hopes, starved on
uncles’ dreams, ragdoll boy
who must change everything
blinking into wind freshened
by an icemelt ocean

squinting at tomorrow.
He's tumbled forward,
cheap goods into steerage,
clutching everything there is,
a ticket, his other shirt, a bar of soap;
for wrap a blanket of fog,
for comfort, wet cheeks and his
mother's goodbye on
a rough linen square, tucked in

yesterday morning’s pocket,
too young to know every departure
wears an arrival under it’s coat.
He thought he’d had
a bellyfull of tongues,

mumbles of better life,
nonsense new beginnings
until they gave him
the silence of that deep

blue voicelessness clearer
than any words, whispering
darkness come dripping
by the board bed to
read him to sleep with
leviathan’s salt breath
and disperse the makeshift
ectoplasmic home exhaled
by heart's hard wish.

All his life to come
he would hate the water
that gave the ship its wings, the
feel of slick shoes,
cheeks wet with tears
long goodbyes and lying
promises blown on white steam from
rough pitcoal to where I stand now,
cheeks wet from my own departures

the only difference between us
that I am naked
under my coat. 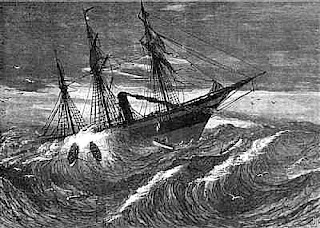 December 2011
This poem is for my grandfather Ragnar Carlson, who in the early 1900's made the long sea journey to New York City and then by rail to Chicago, from Gothenburg, Sweden, alone at the age of eight. Like many immigrants at that time, he traveled steerage, which was the cheapest accommodation. Below you can see a picture of him and his dog taken a few years after his arrival.

Posted for Real Toads
My dear friend, guide and support through the wilds of the poetry blogosphere, Fireblossom of Shay's Word Garden, is hosting a prompt today at Real Toads on arrivals and departures. Sorry not to use one of your very cool photos, Shay, but this one has been in the works a long time and I'd already illustrated it.

Also posted for  Meeting the Bar:Evoking Emotion  at dVersePoets Pub
Note: I don't do critique, and by participating in this prompt, I am not asking for it, just thought the poem fit the theme. 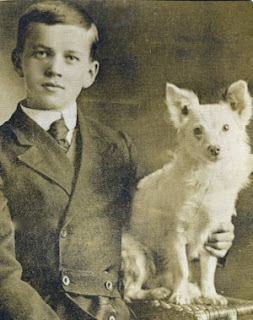