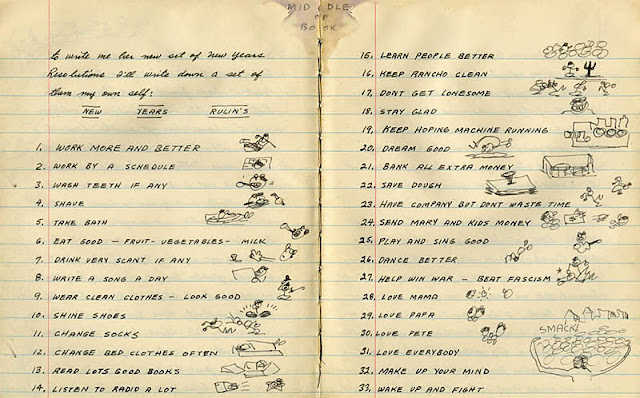 These are Woody Guthrie's New Year's resolutions from 1942, via Brainpickings
I'm not much of a one for either blogging or making New Year's resolutions, but I came across this today, and it seems to epitomize why Woody Guthrie has always been seminal in my own life--why I moved to Oklahoma from Chicago, why I respect the working man and his sense of what's right over the philosopher and the professor, and why I love folk music.
Woody Guthrie had a hard hard life. He wrote two wonderful autobiographical books whose titles and themes express the essence of who he was, Bound for Glory, and Born to Win, a collection of writings, stories and poems, which he wrote prolifically until his health deteriorated. These titles express his boundless hope and optimism as well as his grit and determination in the face of adversity. He carried the hereditary disease of Huntington's Chorea, which leads to dementia and muscle dysfunction, he saw his sister burn to death when he was seven, his mother was confined to an insane asylum when he was 14, he lost children to fire, wives to divorce, jobs to politics, and his own ability to play the guitar through yet another fire injury. He never achieved the success, stability and recognition commensurate with his talents. Yet his writing and singing are full of hope and humor, and above all, compassion for the plight of others.

Guthrie is most well-known today for his thousands of songs, many based on traditional folk music, which he popularized and brought from obscurity, as well as the ones he wrote himself which are considered standards. So here are a few of his songs. And I don't think anyone can go too far wrong following that list of rulin's. Now I'm going to go 'wash teeth, if any.'

"As through this world I've wandered I've seen lots of funny men;
some will rob you with a sixgun, and some with a fountain pen..."
~Woody Guthrie

Images courtesy wikipedia
Posted by hedgewitch at 10:18 AM