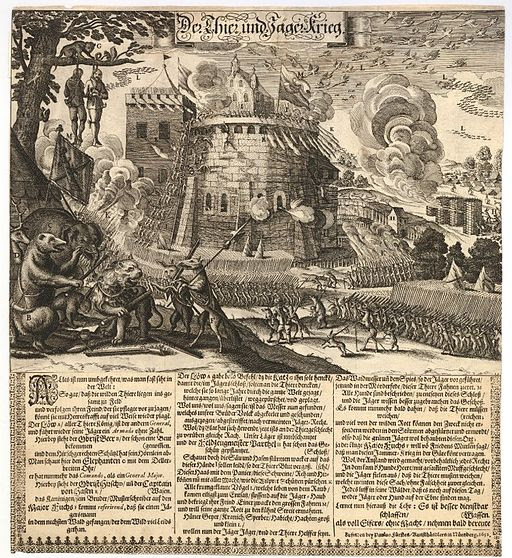 Class Warfare
A Triolet
I watched the day the castle fell,
saw dove and gosling put to sword;
a yowling Vixen rang the bell
and laughed the day the castle fell.
They burned the deer park, sealed the well
unlocked the cage of the talking bird.
She flew the day the castle fell,
calling fools to bring the sword.
March 2012
Posted for  FormforAll~Triolets at dVerse Poets Pub
Gay Cannon has invited Samuel Peralta (of Semaphore)to discuss and inspire us in the triolet form, one of my favorites. I've bent the rules a little here in my political roman à clef, but hopefully I will not be put to the sword.
And those who are counting may notice that there are also
55 torches and pitchforks present
for the G-Man.
Image:  "Der Thier und Jäger Krieg. "A broadside satirizing ordinary people and their aspiration to gain political power by showing the world upside-down, with animals storming the fortification of the hunters..(Nuremberg, Fürst: 1652)[Public domain], via wikimedia commons
Posted by hedgewitch at 4:34 PM