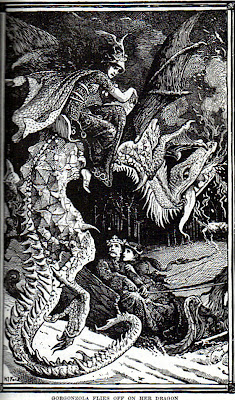 Faerie Tales
Once upon a time
a nightingale
pressed her breast upon a thorn
trilled her last liquid song
to stain for a fool
one perfect rose red.
Once upon a time
a mermaid renounced her tail
trading eternity for
sea foam so her faithless
love could sleep
in his new wife's arms.
Once upon a time
a princess with bleeding hands
sewed for seven years
seven shirts of stinging nettles
to break a spell of swans
but seamed a curse
and once two spirits blent
under knotted boughs
buoyed by infinite air, flower eyes
green barked limbs entangled,
and someone said, Hold tight
there is no bottom.
But that was long ago
and most days
no one remembers
how it ends.
March 2012
Posted for   Poetics   at dVerse Poets Pub
Claudia hosts this weekend, and her theme is fairy tales.
First stanza note: The Nightingale and the Rose, By Oscar Wilde
Second stanza note: The Little Mermaid, by Hans Christian Andersen
Third stanza note: The Wild Swans by Hans Christian Andersen. I had remembered the story this way: A princess has seven brothers who were turned into swans by a wicked witch, and to return them to human form she had to weave seven shirts of magical stinging nettles in seven years--she had finished six, and all but one sleeve of the last shirt when the time was up, so her last and favorite brother was left with the wing of a swan, and died. But the actual story summarized here at wikipedia is a bit different, and does have a happy ending, though considerably more trials en route for the princess.
Image: Gorgonzola Flew Off On Her Dragon, illustration  by H.J. Ford
from Heart of Ice, in  Andrew Lang's The Green Fairy Book, 1892, publlc domain
republished 1965 by Dover Press, my collection.
Posted by hedgewitch at 7:54 PM