Freyja Speaks to the Skalds 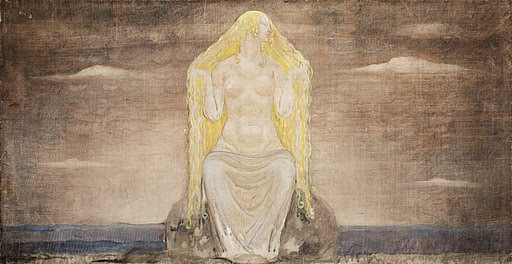 Freyja Speaks to the Skalds
Now I call you, brother
across the ticking void
Feel my hand in yours,
over the scars and tears.
I’m with you where you sit
milling the weary hours
finer finer into a dry flour
that chokes the heart’s pores
for it’s bitter bread
as I was with you
when you raised the promise-cup
in Midgard’s torch-red halls
and played for swinish ears
that ragged tune
of stars and battles, destinies of glass
of ebbing tides and the bones
of love’s last child, with
the gods' last dance
there before
we wore our names,
when your hand spiraled
deep in the womb black cave,
lining for me the ochre herds
wallrunning to fill the stomach
of evernight with life
for all eternity’s migration.
I held you up
in your thin skin boat
of fancy's faith and grief;
I tried you, through the floods
of high seas’ anchorage,
through the dark blood conquest,
holding the dripping blade. In
the stone-ringed grove
under the crooked moon
I spared your life,
left you one-eyed, lamed but singing
in a tinsel of smudged neon night
on a winedark streetcorner wave
where every loss collides
in subway clamor or benched
in garden’s dusky still, for you my
pole-circling breath melts and blows
the spice of far Carib, because

I call you brother.

Under threads of silver gold
where seven shed skins make
a thorny crossroads of your face
still you vigil for the heartsong.
Hear my fade note whisper on shadow wind:
call me, call me, always I will come
but when the sun pours through
white curtains and every
bell is ringing
of course the spell
is broken and
I’m gone.
February-March 2012
Posted for    real toads
Challenge: Love and Affection
"I write because I love it."
~Joan Armatrading
I've had this one in the works awhile, but this prompt really helped it crystalize and while it may seem an odd choice for the theme in some ways, it is about love, the tenuous, pervasive and demanding love  between the Muse in all her guises and her chosen victims and celebrators, along with my usual magpie mix of Norse and other myth, history and prehistory, some of which I owe to the Celtic and Early/Post-Christian
mytho-poetic synthesis of Brendan MacOdrum of Oran's Well.
Thank you Brendan, for Lascaux, the coracles and the garden bench.
Freyja: in Norse mythology, a goddess associated with love, beauty, fertility, gold, seiðr(sorcery), war, and death. (Technically,her brother is Freyr, per wikipedia, among other things 'a phallic fertility god,...[given] Álfheimr, the realm of the Elves, as a teething present.')
skald or scald:
—n    (in ancient Scandinavia) a bard or minstrel
[from Old Norse, of unknown origin]~World English Dictionary
Promise cup: 'The bragarfull "promise-cup" or bragafull "best cup" or "chieftain's cup" (compare Bragi, [god of poetry]) was in Norse culture a particular drinking from a cup or drinking horn on ceremonial occasions, often involving the swearing of oaths...'~wikipedia
Image: Freja, By John Bauer 1882-1918 (www.uppsalaauktion.se) [Public domain],
via wikimedia commons
Posted by hedgewitch at 11:03 AM

Email ThisBlogThis!Share to TwitterShare to FacebookShare to Pinterest
Labels: 2012, dreams of the snow spirit, flat is not flat, history is mystery, plague of norsemen, real toads, the old gods dance, the old gods' libations, what we bring, what we're given