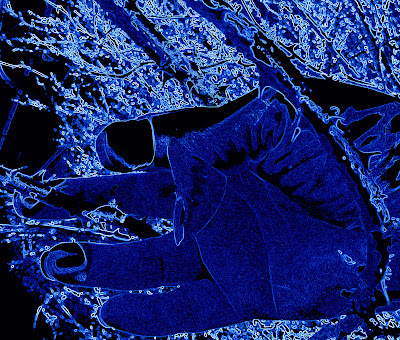 A paper star falling in garden'd night
blown free as detritus, broke-petal'd loon
ground into spring's carpet, too small for sight
I'm coaxed by a merciful crescent moon.
Some say she’s a woman, lying and fair
an inconstant firefly gone too soon
roulette wheel of faces under her hair
while mercy shines down from my lady moon.
Some say he’s a man, full of wink and grin
his face made from craters bleary, jejune
one side too bright and the other too dim
while mercy shines from the man in the moon.
And what do I say, the empty wrapper
the grey punctured leaf, the rosethorn buffoon?
I say each one sees the face he’s after
while mercy shines down from the crescent moon.

"The name kyrielle derives from the Kýrie, which is part of many Christian liturgies. It is a French rhyming form that originated in troubadour poetry and is written in quatrains, in which each quatrain contains a repeating line as a refrain (usually appearing as the last line of each stanza). Originally, the phrase "Lord, have mercy", or a variant on it, was used as a refrain."
You can read more at the link above. I've used the abaB, cbcB etc rhyme scheme, and altered the syllable count to ten, because I missed the part that said it was eight. *blush*


And as always, for fun, and for those who prefer free verse, here is the unpacked, chaotic original from which I drew the form version:


Lover's Moon
Sitting in the night garden
just another wind blown
bit of detritus, petal, old leaf
shredded paper rapper
ground into spring’s carpet,
I’m coaxed by the crescent moon.
Some say she’s a woman
because she changes herself
day by day, making an endless
circle of faces, the full heavy orb
of ivory breast, the curve of hunter’s bow,
the veiled and disappeared mystery,
ever fading, returning,
inconstant and a lie.
Or some say the moon is a man
full of wink and grin
one side always bright, absorbing
the energy of something bigger
the other always cold, turned away.
What do I say,
bit of trodden compost
blown in the night wind?
I say
the moon is a rock mirror
distant surface reflecting,
watching
over every lover
who’s lost.
March 2012
Image:  Thorns, © joy ann jones 2012