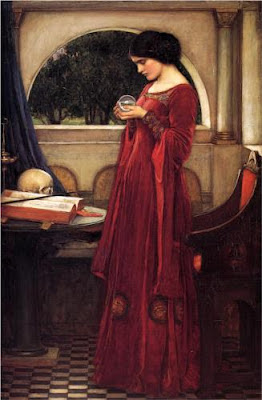 Personal Myth
Part One
The house is white. The poppy is red, growing
crooked up through a crack in time, red as
my new skirts, bright where the whitewashed wall drips
light from the morning’s basting,
gripping the cliff like a child where it walks
swung between adult hands of sea and sky
above the gibber laments of gulls
where the heart has bricked itself a dream
and the still soul rises in smoke
from the terracotta belly
of the fire god on the piazza
burning his ruddy mandate,
midnight to opalescent midnight.
The moon is bright enough to write
saga, storm or singing, but holding the pen
in my love lax hands is an effort
too great so I sit murmuring
my devotions while the careful lips of night
move celestially in response,
and your white shoulder
mirrors a cup of moon
too sweet to drink.There in blue shadow
I feel what is too thin to see

through the window of the room
rounded plum as an eggshell
painted acrylic on white, electric
with all the roses of Persephone,
flirting from every table.
The green hand of a potted dryad taps taps
alabaster skin seven times and seven again,
to crack the womb’s door where
the worlds are kicking to be born.
Open one turquoise eye; you'll see
the woman with a naked face
in a crowd of ten thousand veils
bell in the valley, wave on the sea
harvest of  fog and forgotten seed
pierced by Merlin's pointed staff,
one red poppy

on the mistletoe shaft
growing full-leafed
through my breast.

April 2012
Posted for   Open Link Night   at dVerse Poets Pub
Joe Hesch has the apron on at the pub tonight, folks, and he's holding the doors open to all comers. Come join us. Link in is live till tomorrow midnight.

The myth part of this personal myth is only partially exposed here, because this excerpted draft is Part One of a much longer poem,( the result of answering the question, what would you like to have if you could have anything?) which I am mercifully sparing my longsuffering readers tonight. I don't think this will be the final form, and the rest is not even this ready and may never be, but thanks all, for struggling this far with me anyway.
Header Image: The Crystal Ball, by John William Waterhouse, public domain
Footer Image: The Red Poppy, by Odilon Redon, public domain
both via wikipaintings.org
Posted by hedgewitch at 10:08 AM

Email ThisBlogThis!Share to TwitterShare to FacebookShare to Pinterest
Labels: 2012, cup of moon, dVersity, flowers of Dorian Gray, I can haz everything?, interior paramour, mountain of dreams, OLN, wild rose, witchlight