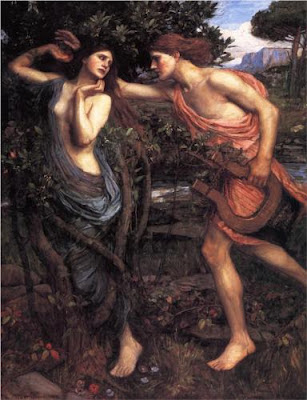 Daphne to Apollo
Or, A Little Song of Lies
with some additions in doggerel
What does he think
I could sing for him now?
The lead arrow is worst
with the golden one first.
or
Never call someone friend whom it's obvious you
have climbed like a tree, for the sake of the view.
or
Nothing so clarifies the question moot
as being dropped like a core of half-eaten fruit,
discarded to either rot or root.
but I think it's best I only say
Thank you for making me what I am today.
The worst liars aren't those who try to deceive
but rather the ones who make us believe.
~August 2012
Process Notes: In the Greek myth, Apollo mocks Eros and his arrows as a child playing with a warrior's weapons. Eros then curses him by shooting a leaden arrow (aversion) into Daphne, and a golden one(love) into Apollo's heart, inspiring him with a mad passion for her. She flees, and in the end begs to be protected from him by having her female identity removed-- she is transformed into a laurel tree from which Apollo takes a branch and weaves a wreath for his head(the traditional crown for victors, poets and musicians.) I have as usual, done some transposing and interpreting.
Image Apollo and Daphne, by John William Waterhouse, 1908
Public domain, via Wikipaintings.org
Posted by hedgewitch at 1:21 PM

Email ThisBlogThis!Share to TwitterShare to FacebookShare to Pinterest
Labels: 2012, little lies and the lying liars who tell them, losing what you never had, simple songs for simple minds, the old gods laugh, why I don't date musicians