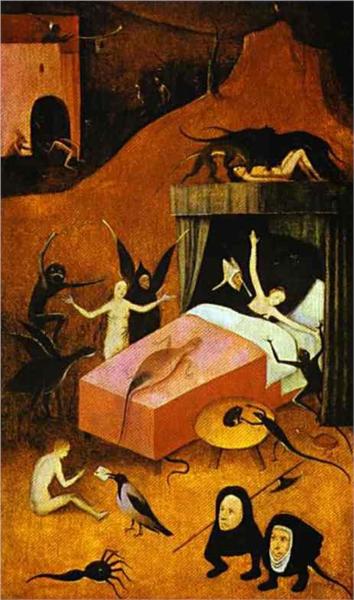 The incubus struggles
with depression,

reluctantly fulfilling
the contract,
turning his bitches
over to
Beelzebub.

He broods.
All
that brimstone
acrobatic
badass act
for
nothing.

Mama Zen asks us to write, in 25 words or less, something using a trademark symbol, something used in our own, or in another poet's work so often as to be identified with the writer. I now have seven poems in my Incubus series, counting this one which, at least for the moment, is the last, so hopefully I've hit the mark. If you'd like to check out the others, click HERE.

Image: Death of a Whore, by Heironymous Bosch, circa 1485
Public Domain, via Wikipaintings.org

Posted by hedgewitch at 1:43 PM