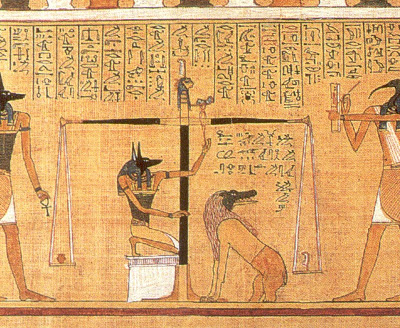 Hiding in Nile-green dark, your heart
fuses tight as crocodile jaws
on midnight meat.
When you bring it to be weighed
against Maat's feather
beneath the clear jackal eyes of Anubis,
it will show them this red-river night
when your whole being bit through me.
The scales will tip.
You'll see the last thing then.

Process notes: wikipedia caption for above illustration:
"This detail scene, from the Papyrus of Hunefer (ca. 1275 B.C.), shows the scribe Hunefer's heart being weighed on the scale of Maat against the feather of truth, by the jackal-headed Anubis. The Ibis-headed Thoth, scribe of the gods, records the result. If his heart is lighter than the feather, Hunefer is allowed to pass into the afterlife. If not, he is eaten by the waiting chimeric devouring creature Ammit composed of the deadly crocodile, lion, and hippopotamus. Vignettes such as these were a common illustration in Egyptian books of the dead."

Image: The Weighing Of The Heart,
By National Geographic, Ancient Egyptians (Book of the Dead)
Public domain, via Wikimedia Commons

Posted by hedgewitch at 6:30 PM

Email ThisBlogThis!Share to TwitterShare to FacebookShare to Pinterest
Labels: 2013, blue feather, book of the dead, friday 55, the old gods laugh