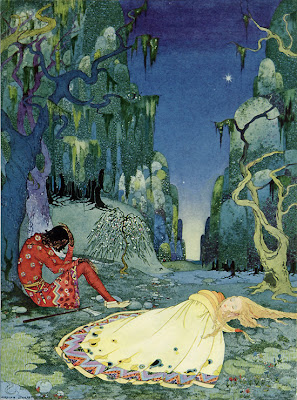 In the shade of a mushroom
she reached for his hand,
the woodwose, the elfman
with a cobweb command.
His fingers were cold
as a bowl of straw soup.
The bright moon showed up
his barked back and stoop.

that began in her ears
and rang to her toes
and no one saw her again
where the black rose grows.


posted for    real toads
Challenge: The Lark and The Toad: Storybooks
and the illustrations of Virginia Frances Sterrett
Kerry asks us to pick one of these evocative illustrations and write a story-poem to go with it.

Process notes: Woodwose: "The wild man (also wildman, or "wildman of the woods", archaically woodwose or wodewose) is a mythical figure that appears in the artwork and literature of medieval Europe, comparable to the satyr or faun type in classical mythology and to Silvanus, the Roman god of the woodlands." ~via wikipedia  .

Image: The Forest, by Virginia Frances Sterrett,  via Art Passions