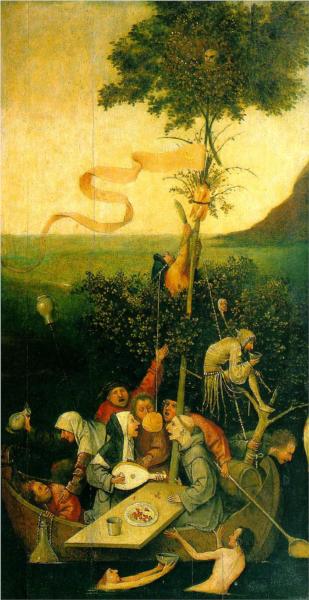 In the dying twilight time
after the machine gun wedding
after the brotherhood of the bomb
after the last furrow fails in the fallout
when nothing prospers but wasting,
the damned have a dance they do
on the deck while the plague ship glows.

After the falter of centuries
they remember the helix of plague twists,
sail hard on the blood of a rat pack,
raise masts rigged with plastic explosives,
wear their red masks over the lesions,
landfall a corpselight cotillion
docked at the irradiated port of blue ruin.

The straw man is playing the bone flute.
The jackal is drooling, the deaf mute
feels up the fat girl by the bat tree
and Pan is perplexed in the pantry
where the death watch beetle clacks
in all the joints and cracks

the music of the end of the world.