"..Dear Sir or Madam, will you read my book?
It took me years to write, will you take a look?
It's based on a novel by a man named Lear
And I need a job, so I want to be a paperback writer..."
~Lennon/McCartney


I have to admit, when anyone mentions the inimitable Edward Lear, the above song is the first thing I think of, so that's why it's the opening for my response to Kerry's challenge at Real Toads on this versatile and surprising man whose birthday falls in May. As an inventor of amusingly surreal figurative language in his popular nonsense rhymes for children, often inset with his own quirky drawings, Lear was a big influence on John Lennon, among many others.

Lear also legitimatized and popularized the limerick, so  I started out with one of those:

There once was an author of silly
who dressed up as a thoroughbred filly
in a mauve feathered hat.
He liked it like that,
but for racing a dress was too frilly.

I also learned from Kerry's article that Lear was a landscape painter and illustrator, and she suggested we might write something inspired by his visual art, so here is my moderately nonsensical response to that: 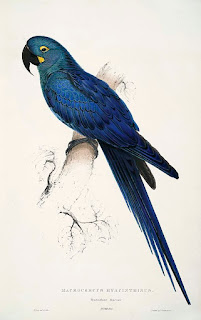 'I believe, old boy,' I heard Parrot say
to Tortoise, 'it was yesterday
as you were artfully, amphibiously
pontificating in a pondmud sea,
that you stated it wasn't faith, in fountains,
but bitching that moved mountains?'

Tortoise lifted his leathery head,
he swallowed twice, Oh, yes,' he said,
'I'm sure the stars are nagging the moon,
and the moon yells the sun up to every noon
for without the blessed safety of blame,
who would leave its shell, or know its name?' 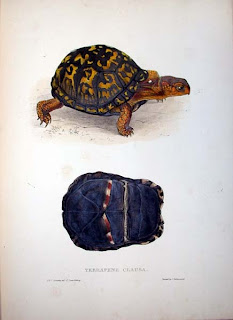 Parrot looked down from his monocle-tree,
'Respectfully, sir, I must disagree.
As a bird, I may know only one thing
and that is I don't know anything,
but whenever I squawk in a cave of swallows,
a confusion of shadows bursts up from the hollows.

When the May wind finally decides to blow
tulips throw petals like coloured snow,
green rain dances sideways. I've come to see
that where we are stranded luminously,
perilously, between earth and sky,
everything living decides to fly...'

posted for   real toads
Weekend Challenge: Edward Lear
Kerry O'Connor discusses the work of English author, painter, illustrator and poet Edward Lear, and challenges us to deal with his nonsense. I've cast the tortoise in a rather negative role here, tho I'm actually quite fond of them--but someone has to be the heavy.

Posted by hedgewitch at 1:18 PM