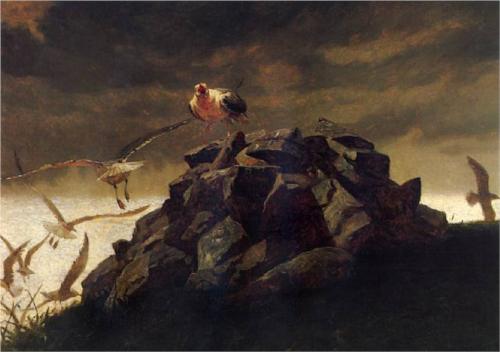 From the remembered
master singer sea,
seven songs came curling
waved up because I believed,
more cryptic than the
real calypso of crickets
under the redpepper moon that climbs
my cloud-fancy sky;

seven songs from seven sea birds,
thrusting their celebratory bitchery
at me, ruffling rapidly in the air
just past the precipice, cawing
the broken bang of dead souls
dropping.
These birds I only imagined out
from a sodden souffle

of raw ingredients best not examined.
aren't much, really; a simple glare
over water, minimally assembled for
day after day of diving, flying, gorging
on whatever  floats or falls. Useless to leverage that
extra torment into their gut-grinding
croaks, or into the monstrous surf, or even
the slide-cracking bite of the sideways crabs.

The house of the heart must be quieted, opened up,
cleaned with delicate scavenger pincers, no
recalcitrant strands left clinging, its chambers
made hollow as empty carriages
passing in fog in a book,
until seven songs and more
ride the pandemonium wind,
the drumbeat of gull wings forgotten.

posted for     real toads
Challenge: Get Listed--of Catnip and Moons
The enterprising and original Timothy Schaefer provides today's word list, which was abnormally enticing to my backwards muse, so here is the result. For the exact words see the above link. I've used most of them, I think. Timo blogs at Catnip, and has recently put together a book of his unique prose and poetry called Darwin's Moon, which I gratefully own and heartily recommend.

Image: The Rookery, by Jamie Wyeth, 1977
This image may be protected by copyright. All rights belong to the copyright holders.
via wikipaintings.org