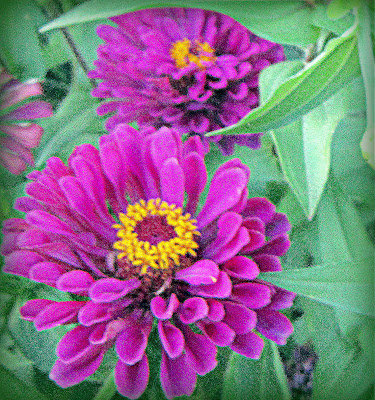 Empress of the endosperms
mistress in the chancery of purple,
ruffle-seamed, the violet queen
in her inverted artichoke gown
feeds the wind her bee-stained crown.

Though I've been for years
a wildeyed raving socialist,
I've found I can't cut her down
to see her dead trophy head
spiked in the vase instead.
Let her run while she can
ruinous wild, steal magenta from dawn,
loll wide-eyed bossing butterflies,
secure in a monarchy fitter,
checked only by the parliament of winter. 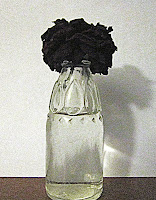 posted for    real toads
Challenge: Hungry and Haunted
The ever-warm, evergreen Hannah Gosselin asks us to  examine the contrasts of Japan's Hitachi Seaside Park, as a starting point for some poetryfying--I wandered a bit offtrack to the zinnias in a backyard in Oklahoma, but hope I have still stumbled into some version of  "...contrast and climax ."