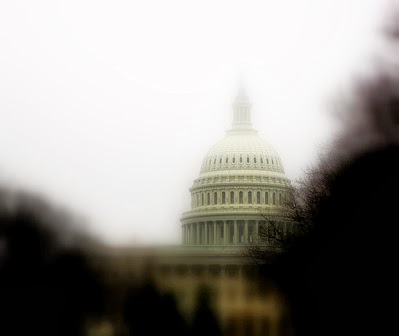 When you strain milky truth
through the cheesecloth of fear,
the whole churn clogs with
the curds of your distempered freakout.

Candor claws the clowns; she
drags the rags off the social mediums
selling  their crystal-bald confusion,
but the cowardly ant-lions

continue
fooling on the Hill.
lying their meat-eater's way
through the last Missed America.

Process Notes: The current U.S. Congress, the 113th , which has the lowest approval rating since such things have been measured ( < 9%) is also set to go down in history as the LEAST productive ever in our 200-some year history. Way to go, guys! On the other hand, maybe the less they do, the safer we are....


Image: Capitol, by Paolo ordeveza, on flick'r
Shared under a Creative Commons license.
I have manipulated this picture. See original here

Posted by hedgewitch at 7:00 AM

Email ThisBlogThis!Share to TwitterShare to FacebookShare to Pinterest
Labels: 2013, D.C. after dark, everybody knows this is nowhere, evil clowns, friday 55, no intelligent lifeforms, plague of locusts