Funeral Of The Knife

Funeral of the Knife

In this absence,
sudden pause, naked as a strip-mine
half-precious as a licked pot
clean-cheeked as a skull,
the knife is waiting
for the silence of burial
to lie null and dulled
in earth packed beneath
still-bloody boots.

Let it be so: that it fails,
is ready to go, to be dropped,
death-work unremitting
finally too much.

So long we've spent making it,
honing it, plunging it deep,
so long it's been
sharp-sunk at the center
revolving a delirious
compass, pinning us
blind to course, swinging
between hate and fear
never still long enough
to map the latitude
of peace.

We are lost without it
shoveling here, lost
as the freed needle spins, lost
but waiting, wanting
these mortal wounds
somehow to
scab over. 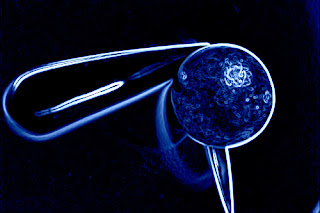 posted for   real toads
Weekend Feature: Nelson Rolihlala Mandela ~ In Memoriam
Kerry O'Connor has given us a thoughtful, suggestive and loose prompt, to reflect, in micro or macrocosm, on the life and struggles of this recently passed larger-than-life figure and great man of South Africa and the world. Here I have tried to write about the possibility of peace, and how it seems to be an elusive promise wrapped in blood and struggle.

Top Image: Knife Stabs Downward, by Anthony Easton. on flick'r.
Bottom Image: Copper with knife, by GollyGforce, on flick'r
I have manipulated this photo. You can see the original HERE
Both images shared under a Creative Commons Attribution Only License.
Posted by hedgewitch at 12:05 PM

Email ThisBlogThis!Share to TwitterShare to FacebookShare to Pinterest
Labels: 2013, knife, mountain of dreams, peace like a river, real toads