One of our Christmas pastimes this year was watching a few movies we picked up at the used book store. Among the usual uneven lot of hits and misses was a flick called The Raven, starring John Cusack, and it was a pretty terrible film, yet Cusack gave a rather endearing, if historically less-than-accurate portrayal of Poe, complete with pet racoon and raven, in the days shortly before his mysterious death, the explanation for which no one has so far discovered. (The one contrived for the film was definitely ingenious, if hardly believable.)

All this reminded me that I have not continued with my spotlight on that author very assiduously, so I have here

on the Off The Shelf Page, the second selection in my Poe-a-thon, called,  Alone.

Below is last month's poem, exhumed for a final reading before being interred ("For the love of God, Montresor!") in the archival vaults: Spirits Of The Dead. 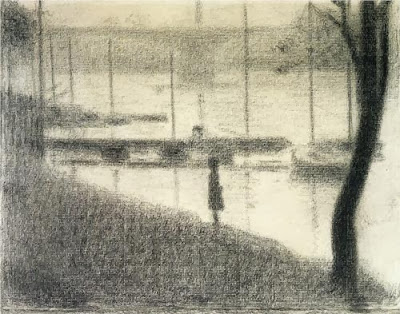 Spirits of the Dead

Thy soul shall find itself alone
'Mid dark thoughts of the grey tomb-stone;
Not one, of all the crowd, to pry
Into thine hour of secrecy.

Be silent in that solitude,
Which is not loneliness- for then
The spirits of the dead, who stood
In life before thee, are again
In death around thee, and their will
Shall overshadow thee; be still.

The night, though clear, shall frown,
And the stars shall not look down
From their high thrones in the Heaven
With light like hope to mortals given,
But their red orbs, without beam,
To thy weariness shall seem
As a burning and a fever
Which would cling to thee for ever.

Now are thoughts thou shalt not banish,
Now are visions ne'er to vanish;
From thy spirit shall they pass
No more, like dew-drop from the grass.

The breeze, the breath of God, is still,
And the mist upon the hill
Shadowy, shadowy, yet unbroken,
Is a symbol and a token.
How it hangs upon the trees,
A mystery of mysteries!