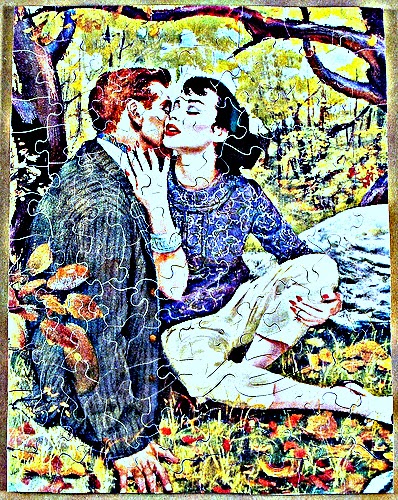 When the devil cut the puzzle
he used a dull jagsaw.
Some pieces can't ever
be matched as they should;

and so the tale of the meeting of
the incubus and I, each given our shape
by a  notch in the other, drawn close,
pushed away, fretfully shifted, buck-dancing
little hellfire fractals out our asses.

Once owned as a mule
and successfully damned, I was
delicately demolished, knobs crumpled,
voids slapdash split square to circle.
Then it seems he was finished,

Playboy mission
from Leisure Suit Beelzebub
accomplished, since
it's well known Below only those
who hang on to their souls have a value.

Good tales have a moral, and my moral is this:
it's impossible to make whole

what's been jigsawed in Hell,
despite infinite labor in distortion and wish

for the saw is as dull
as it ever was jagged, and what
the Hell is a puzzle
but the fiddling pastime
of the chronically bored?


another of the Incubus poems


posted for     real toads
Challenge: Persons of Interest
The tropically inclined Corey Rowley of Mexican Radio asks for  a piece of writing about someone we've met while traveling. I think I have complied at least with this directive of his: "I want you to think of someone you have met on a special trip to your special place and write about them."
Yes, that would be the incubus and that would be Hell.


Image: Puzzle 52, by jjpuzzles on flick'r,
Shared under a Creative Commons Attributions Only License.
I have manipulated this image.

Posted by hedgewitch at 3:58 PM

Email ThisBlogThis!Share to TwitterShare to FacebookShare to Pinterest
Labels: 2014, bitter?who's bitter?, blood under the bridge, devil to pay and no pitch hot, incubus, real toads