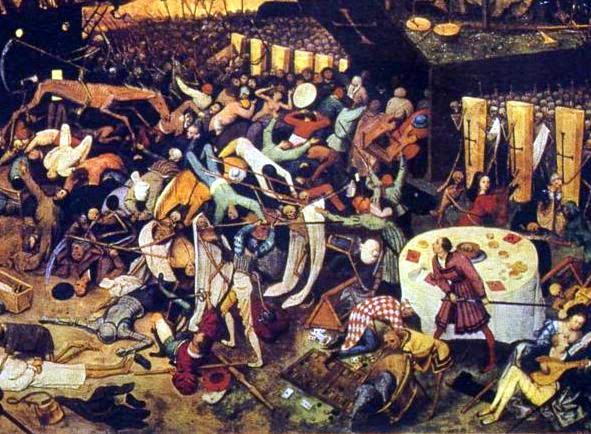 
When I met the devil's dancer
with his train of rainy knaves
too crazy for the kitchen,
too mean to put outside,
I had to choose to dance beside them
or die without the garden
in the riddle of their love.

They had a salve
they rubbed my skin with
to make a sudden stunning
of the secret self they sundered
from the untelevised quotidian
unknotted skein of childhood's yarn.
Their eyes were drug enough

at first; their skin became
my memory
burning through the now,
using all the oxygen
droning out the antiphone
disharmony of danger,
that intoxicant of the flesh.

And as the bella-
donna kicked my head
they did my favorite thing:
whisked the cloth from the crystal table
leaving everything intact, tossed me high
through a shrinking skylight
I never knew was there.

They called the falling flying
and I suppose it's as close to that
as any animal can come.

Process Note: "Atropa belladonna or Atropa bella-donna, commonly known as Belladonna or Deadly Nightshade, is a perennial herbaceous plant... native to Europe, North Africa, and Western Asia. The foliage and berries are extremely toxic, containing ..alkaloids. ...which cause a bizarre delirium and hallucinations... In the past, witches were believed to use a mixture of belladonna, opium poppy and other plants.. (such as monkshood and poison hemlock) in flying ointment, which they applied to help them fly to gatherings with other witches." ~wikipedia

posted for     real toads
Challenge: Get Listed
Fireblossom(Shay's Word Garden) has leaped into the breach with a short but pithy word list, from which I have grabbed a few selections, combined them with one of my usual incomprehensible dreams, and totally gone off into the weeds. But, you can only use what you got, right?

Image: detail from the Triumph of Death, by Pieter Bruegal the Elder  circa 1532
public domain via WikiArt.org

Email ThisBlogThis!Share to TwitterShare to FacebookShare to Pinterest
Labels: 2014, 3 AM again, acid allegory, case of who., dancing doll, demons, fever dream, fireblossom, real toads, who are these people?