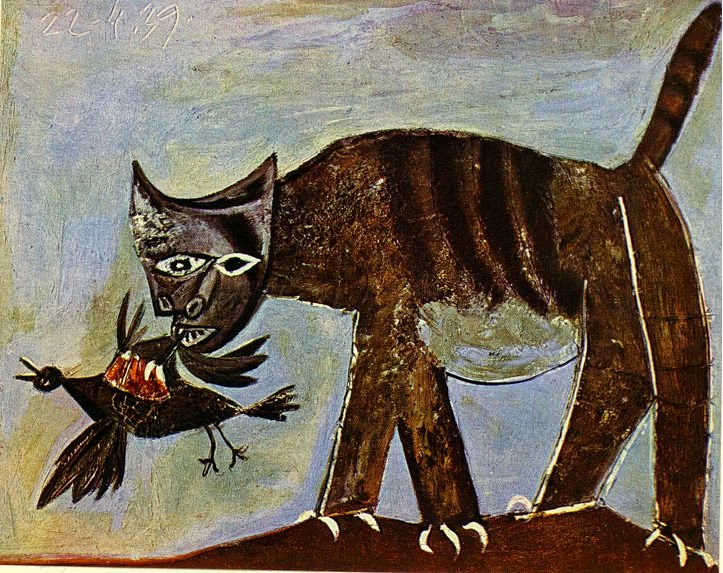 Once upon a dismal Friday as I gazed out on the skyway
dripping fitful raindrops highly irking to my fur,
as I nodded, moistly napping, suddenly there came a crapping
from a feathered menace flapping, hovering in the dusky blur.
'Tis some noisome pigeon,' said I, 'perched upon the entrance door.
Only this and nothing more.'

Ah, distinctly I could spy it, murdering my peaceful quiet,
it was useless to deny that bird that leered down from the door;
as I watched it puff and flutter, black as ink and slick as butter,
softly I began to mutter, 'this is nothing but a gutter starling fed on rotten store,
just a starling garbage-fattened, hanging on the entrance door.
This it is and nothing more.'

But suddenly there came a squawking, as if the monstrous thing were talking,
a devilish and infernal cawking,  a stalking once I'd seen before
from a creature long-forgotten, with a tongue my Master taught on
many a sleepless midnight fraught to speak out misbegotten lore.
Twas the thrice damned noxious Raven with his prate of 'Nevermore"
that woke me, angered to my core.

He did not come to grant me wishes with a beak o'erfull with fishes,
or cook me liver so delicious that I swooned upon the floor--
No! he set my tail a-lashing, and my pointed teeth a-gnashing
with his ever-constant trashing of the entrance door--
obliviously besplattering, while for treats he did implore,
treats Mine Alone for evermore.

Never, swore I, would he triumph, play the monarch or the pontiff
ruling me with caw and quantive statements from the entrance door.
So low I crouched upon the railing, and as he his tail was trailing,
did I pounce upon his failing body as I spilled its gore;
squawking yet he tumbled sailing, down before the open door.
This I saw and nothing more.

As he lay there feebly twitching, I scratched my ear, for it was itching---
and the Raven he went pitching wildly 'cross the chamber floor.
Like the Rabbit ran from Alice, to the pallid bust of Pallas
limped the vandal of our palace that I knocked down with a claw.
As finally then a silence placid fell upon that bird most foul,
quoth I the Kitty, 'Nevermiaouw!" 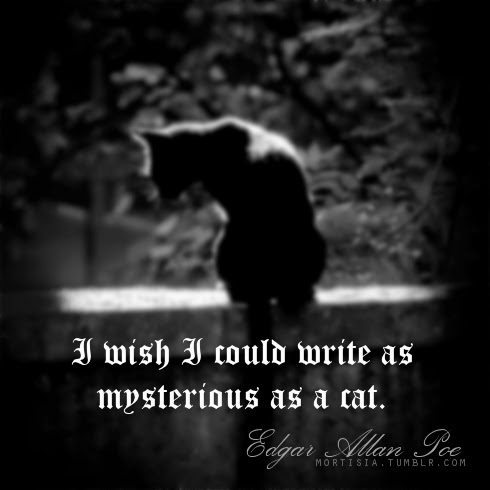 posted belatedly for    real toads
Kerry's Challenge: If only they could talk

Thanks to Fireblossom for leading the way with her poem describing the funeral oration of Dog Antony,  the premise of which I have shamelessly transplanted here in hedgewitchian soil.
Kerry, in her rendition of Dylan Thomas's dog's final wishes, takes this concept beyond pastiche and into pure poetry, but here I have played for laughs.

Edgar Allan Poe is said to have had a cat named Cattriona, and I chose this pairing for my poem in part to mark the anniversary of Poe's death at age 39 on October 7, 1849. The inspiration for it however, comes directly from Kerry O'Connor's prompt, and any Raven involved is purely a product of Poe's imagination. No actual ravens were harmed in the production of this piece.