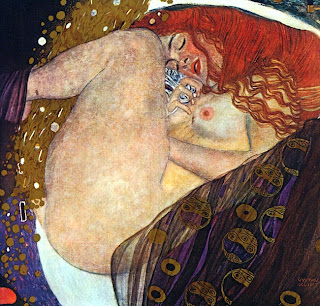 My mother was a fool
to take that flower
picked and bound to die,
with but one seed to fly
from you, a seer's toy,
symbol of a dead hour
lesson of a broken school.

To be mortality's martyr
I became your towered barter,
womb pointed down
a field unfound,
a beeless meadow, I
heard above in the roll and pound
a god who was so much smarter.

On the bridge of night's black river
I wrapped hands and feet in skins
to turn the lightning of his whim,
to hold the spill from the silver krater:
mixed wine of the poet's grief,
bright rain of the god's relief,
seed of your mirrored killer.

By then it was far too late,
as we slept on the god-calmed sea,
my sword-sharp boy curled into me
till mercy washed us dry, too late
to unpick the dying flower
of your trivial collateral fate.

Process Note: A krater  is a large vase which was used to mix wine and water in Ancient Greece.

"In Greek mythology, Danaë was a daughter of King Acrisius of Argos and his wife Queen Eurydice. She was the mother of the hero Perseus by Zeus....Disappointed by his lack of male heirs, Acrisius asked an oracle if this would change. The oracle told him that he would be killed by his daughter's son. She was childless and, meaning to keep her so, he shut her up in a bronze tower or cave. But Zeus came to her in the form of golden rain, that streamed in through the ceiling and down into her womb. Soon after, their child Perseus was born.Unwilling to provoke the wrath of the gods or the Furies by killing his offspring, Acrisius cast Danaë and Perseus into the sea in a wooden chest. The sea was calmed by Poseidon and at the request of Zeus the pair survived." ~wikipedia

Posted by hedgewitch at 6:58 AM