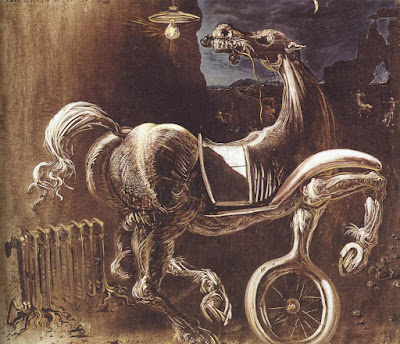 The incubus is having
another rough night;
a bitter bell keeps ringing
between his horns, foreign,
off-tempo, pounding like
the gallop of a three-legged horse,
or the arrhythmic crash of cambered granite
tumbling from a fallen cathedral,
and to top it off

there's an angel in the fire,
feathers burning acrid, ashy black,
dialing, dialing the clouds, asking
the great silence left when the clacking
rotary wheel cogs home: Where is the bird-winged host,
my alabaster birth brothers, the holy
triune fatherspiritson
to pull me out?

The incubus knows the angel
has landed in the wrong fireplace for this,
yet still he wishes
it would happen, to see at last a miracle
not born of tormented flesh,
and also so the noise would stop,
the pale, luminous eyes cease following him
from window to window as
he tries frantically to let out the stink.

Doesn't it care, this minister of grace, that
the incessant ringing, the billowing smoke
of its rendered virtue, distract him
from his greatest opus?
(50 Shades of Damnation,
to be published next spring.)

Why doesn't its everpresent
compassionate disaster master save it?
Instead it burns and burns
as the phone rings on unanswered,
sweetly smiling, staring at him
as if the lines weren't down,
as if there was something
he could do. 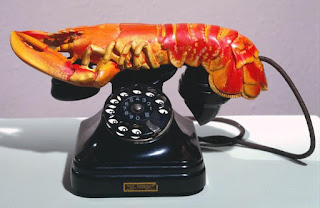 (For my other poems in the incubus series, just hit the eponymous tag below.)

Images by Salvador Dali, Fair Use via wikart.org
Top:Debris of an Autobile Gives Birth to a Blind Horse Biting a Telephone, 1938
Lobster Telephone, 1938

Email ThisBlogThis!Share to TwitterShare to FacebookShare to Pinterest
Labels: 2015, all hallows, angels, conscience doth make demons of us all, devil to pay and no pitch hot, epistemological impasse, fireblossom, if a man answers you better hang up, incubus