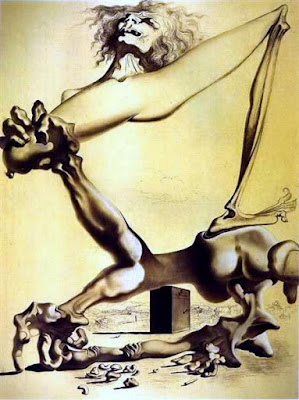 The swagger-boys
came at nine
to set back time;

They shaved my head
with Occam's razor;

burned down my house

At last they showed the knife
and took my legs;

that let me crawl away
on love alone.

" [Hitler] has grasped the falsity of the hedonistic attitude to life. Nearly all western thought since the last war, certainly all 'progressive' thought, has assumed tacitly that human beings desire nothing beyond ease, security, and avoidance of pain. In such a view of life there is no room, for instance, for patriotism and the military virtues. ..All three of the great dictators have enhanced their power by imposing intolerable burdens on their peoples. Whereas Socialism, and even capitalism in a grudging way, have said to people 'I offer you a good time,' Hitler has said to them 'I offer you struggle, danger and death,' and as a result a whole nation flings itself at his feet."
~George Orwell, from a review of Adolf Hitler's Mein Kampf, New English Weekly (21 March 1940) via wikiquote