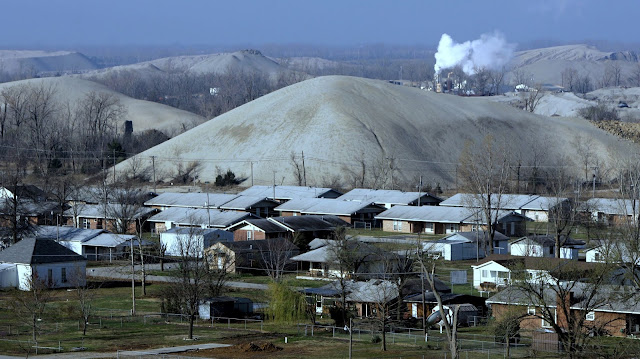 Faint sunshine
speckles the frosted
piles of slag
like colonnades of crumbling
carbon dust that line
the missing mile.
The great steel drag,
the rusting teeth and feral smile
have carved the lime
we delvers bring
to all our latter works
of cancelled spring.

The bites of life
we take regurgitate
some foolish tinsel'd
fail of poisoned joy
while in the east the
crescent shrinks to silver
sparks, night hangs the
spinning seethe of stars
our blind eyes block;
our smallness and our deathtoys mocked
by a brooding hatch of dark
and limitless shock.

Oh stars--gods'
eyes that laser out
our fool's disguise;
what an underworld we make to hide our lies.
What curses can you break to turn us wise
when you come laughing
on the wail of a newborn wind
so the wide green world can fill its graves
and breathe again? 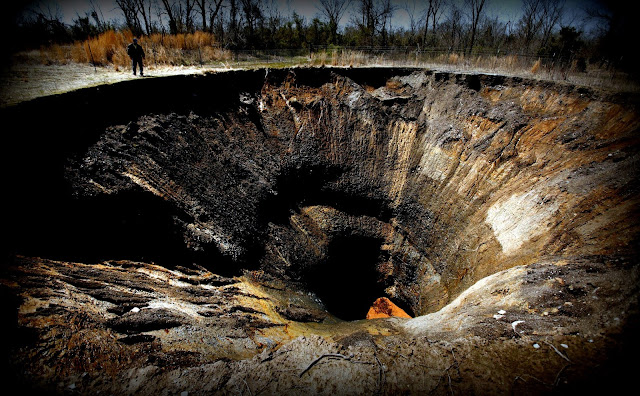 The images above are ©AP/Charlie Riedel, from this article:

"The chalky hills were a kind of town gathering point. The people of Picher, Oklahoma regularly picnicked there and rode bikes. Sometimes they carted the dust away and mixed it with cement to fill their driveways. Some parents added it to their children’s sand boxes. When a breeze picked up, it whipped clouds of the fine sediment through the air....For almost a century, town residents had no idea the dust was poison...
Around the turn of the 20th century, miners discovered Picher’s subsurface stores of lead and zinc. As America entered World War I, demand soared for lead to make ammunition, and Picher became one of the biggest hubs in the region’s tri-state mining district, an area between southeast Kansas to southwest Missouri. Roughly 75 percent of the American bullets and bombshells used in the two World Wars were made from this area’s metals; half came from Picher alone. At its height in the 1920s — when the town’s population reached about 19,000—227 mills were processing 10 million pounds of ore per day.
Miners carved into the earth underneath Picher. The lead and zinc ore they hauled out had to be separated from the limestone and dolomite rock that surrounded it. And the remains were piled into chat mountains around town, some 300 feet high. By the time mining ceased in the late 1960s, there were 30 piles totaling 178 million tons. The local school was built in the shadow of the hills, and the high school track team trained on them....
...in 2011, the federal government sold the massively toxic waste region, known as the Tar Creek Superfund site, back to the Quapaw Indian tribe, which had been forcibly removed from their ancestral Arkansas home and relocated to northeast Oklahoma in 1818. In 2017, the EPA granted the Quapaw $4.9 million in cleanup assistance..."

Picher is an uninhabited ghost town today. Millions have been spent to clean it up, but only time and the planet itself may have the power to do that.

Posted by hedgewitch at 5:40 PM

Email ThisBlogThis!Share to TwitterShare to FacebookShare to Pinterest
Labels: 2020, everybody knows this is nowhere, hope in the madhouse, starry starry night, the old gods bleed, toxic shock, witchlight