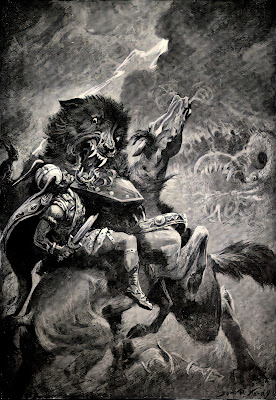 Fenrir
"..from where will a sun come into the smooth heaven
when Fenrir has assailed this one?"~Vafþrúðnismál
I.
They say the basilisk
walks her own wasteland,
each green thing that springs
corrupted by her breath,
each life that starts
turned to stone as
she spies it, so that she lives
with nothing all her days.
She knows the sphinx
has long since forgotten
all riddles but the one
whose answer is sand.
II.
The wolf at the door
puts his paw on the child's neck.
His breath smells of tiny lives,
his eyes are round as the moon.
He waits with her for the Ragnarök
to devour the world, to swallow the gods
to bring a new sun
to the skies we defile
but while waiting he smiles
his dog-smile, his tongue soft on her cheek.
From deep in the shadows
the basilisk regrets
the power of myth, and
the child
waits to grow
and run with the wolf.
December 2021 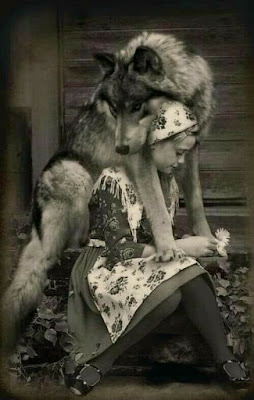 posted for Fireblossom
at
The Sunday Muse
Note: In Norse myth,  ragnarök refers not only to a time when gods and men will fight against monsters and jotuns and be destroyed, but also to the world which will follow, where the earth is purified and gods, nature and man are given a second chance.
Images: Odin and Fenris, 1909 © Dorothy Hardy   Public Domain
Wolf and child, via The Sunday Muse  author unknown Fair Use
Posted by hedgewitch at 9:42 AM