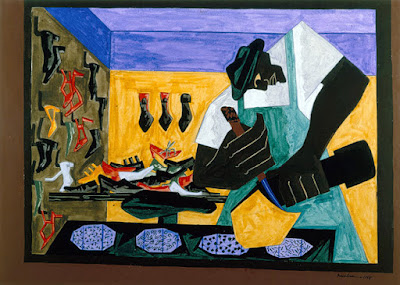 Hues
He was just
one of too many
born black for the factory
taught to make salt
into roses and clocks, just
a sole to spare the parade marshal's foot,
a board for the floor, another pot
of coffee for the landlord
but there was something
he got from the moon; that weary
knife-smile, a jones for books and
bitter truth, a taste of jazz
in his blood, and so
he became instead
the blister on the heel, the knot
in the plank, the spider in the cream,
the argument for faces.
January 2022 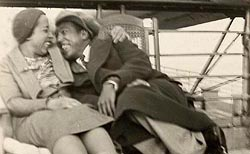 posted for
Shay's Word List: Langston Hughes
Note: The photo above is a snapshot of Hughes with his good friend and fellow activist, Louise Thompson Patterson, both thorns in the side of contemporary white/status quo culture as members of the Communist Party and prime movers in the Harlem Renaissance.
Images: The Shoemaker,  1945, © Jacob Lawrence   Fair Use
Louise Thompson and Langston Hughes, shipboard, circa 1915-1925  Public Domain
Posted by hedgewitch at 10:39 AM