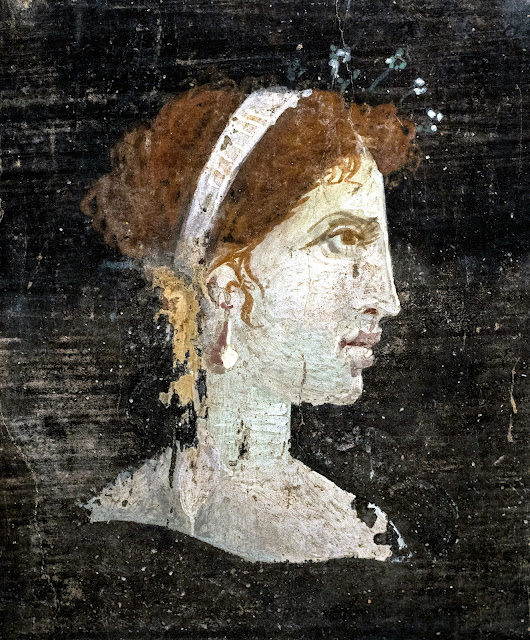 Kleopatra Fantasia
Cleopatra rides the rails
but never the bus
a foreigner now
as she was in Caesar's city,
workmen shifting her from station
to museum, crated like so many
cans of beans.
She is silent as sand,
stilled limbs leafed in gold, a
treasure always in transit though
black as bitumen now, cat eyes
blind in an empty skull,
everything drawn out
but her dry heart.
She was bread once
and a circus too, lithe
as a lotus stem snaking up
to lay its white flower
on the cheek of Lake Mareotis,
rippling like a pneuma of rain
through the changing houses of Ptah.
Her tongue danced to a dozen
languages. Her mind was a library
of betrayals, each volume a loss
to Alexander's insane epigoni.
Her future was scribed from
the Books of Breathing and
ambition's killing text:
Caesar's smooth hand
and Antony's sparking eye,
a brief breath of kingdoms, twins
of the sun and moon, all a mirage-
shimmer bright as sanctuary
whose telos was only vast silence
flowing from
the open mouth of an asp.
October 2022 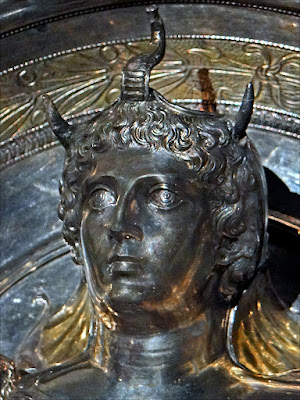 posted for
Word Garden Word List
and also linked at
earthweal for Open Link #139
epigone; plural noun: epigones; plural noun: epigoni
a less distinguished follower or imitator of someone...
Books of Breathing: late Egyptian funerary texts simplified from the Book of the Dead
Notes: Cleopatra does not ride rails or frequent museums, as her body has never been found, tho a tomb has recently been postulated north of her capitol city Alexandria at Abusir, near what was once Lake Mareotis (Mariout or Maryut in modern Arabic.)
In the Egyptian process of mummification, all internal organs were removed except the heart, which was considered the seat of thought and identity.
The Ptolemaic pharaohs of Egypt, of which Cleopatra was the last, were crowned by the High Priest of Ptah, (creator god who made the world through the power of speech) at his temple in Memphis. They were more Greek than Egyptian, descendants of a general of Alexander the Great after his conquest there, and Cleopatra was the first and only one to learn the Egyptian language. According to Plutarch, she was fluent as well in Greek, Ethiopian, Hebrew, Arabic, Syrian, Median, Parthian, and Latin.
Cleopatra had four known children, including twins with Mark Antony, Alexander Helios and Cleopatra Selene.
The endless list of wars and civil wars which Cleopatra was directly involved in over the tumultuous course of her 39 years is too long to begin to reprise here, but you can read about them and what is known of her complex life in detail here on wikipedia
Images:A posthumous painted portrait of Cleopatra VII of Ptolemaic Egypt from Roman Herculaneum, made during the 1st century AD source here
A raised relief depiction of a woman dated to the early 1st century AD and thought to depict Cleopatra or Cleopatra Selene II, Queen of Mauretania, daughter of Cleopatra VII of Egypt and Mark Antony. source here
Posted by hedgewitch at 1:11 PM

Email ThisBlogThis!Share to TwitterShare to FacebookShare to Pinterest
Labels: history is mystery, new kingdom, queen of kings, sleeping with the enemy, snake in the lass, the old gods' libations