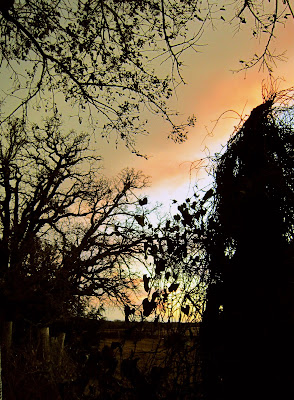 The dead
are
close tonight
I feel
their lost-boy's breath
thru their party clothes.
They ask
pardon for
drunken nights,
lies'
glancing blows; that

being kind;
for death does not erase
the blotted soul,
but lightens
the little sins
that make us whole.

I have written a second 55 this morning, as I woke up thinking of my grandmother.
(Reading is, of course, optional.) 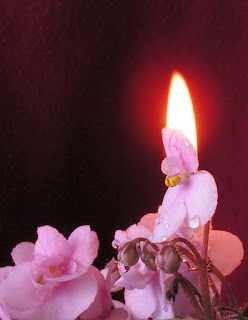 Lilac And Apples
for Clara


You gave
lilac, green apples,
sugared coffee and cream;
no screams, no disorder
ever-bendable conditions.
We snipped bits of saintpaulia
to lay down on the earth and
they'd bloom in a year
pink-purple, felt-smooth.
Your wealth was in flowers and in loving's full sum,
and mine in your arms where no bad thing might come.

The Cat in the Well~A Halloween Fantasia

It's here at last! Halloween, All Hallows, All Souls Day, The Day of the Dead, whatever you care to call it; my favorite holiday. To commemorate it, I repost this nice cozy horror poem, as I have every Halloween since it was first written, a little Verse Escape tradition. Enjoy! 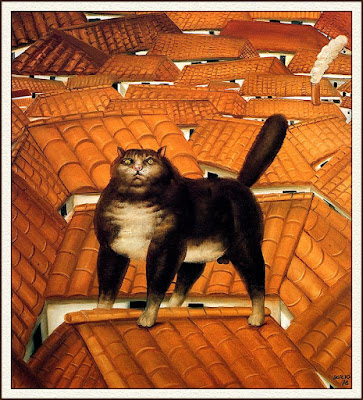 The Cat in the Well

My name is not Odin (I forget my name) but I’ve lived
in the well for a mad moon’s making, alone with the roots,
the deep water oozing and lapping the bones’ sweet arch
that lifts my home, my tumulus a wet black mouth, alone
till the cat fell. My dying was long, my strength nearly gone
till the cat fell, till the cat came down the well.

Odin was a god (so I heard before this spell.) Death gave him back,
yet a well took him in, his eye for a drink from the frost giant’s blood
below Yggdrasil. I am not he, but a shrunken spriggan,
devil’s daughter, giants’ kin, hung here stranded in small skin
to guard what I can't spend when the faith gave way gave out gave in.
Even the dark forgets my names, forgets my games,
even the dark, till the one I played at with the fallen cat.

For when the cat fell, the light (so remote, so white) blazed
sudden, sure it could end the dead dream that crawls my veins
of a land where we once loomed large long gone;
because of that I let him live, alone of them all. He took my hands,
he took my tongue. He gave his eyes, I loth to stop what he’d begun.
He took my tongue the cat that fell, the cat come down the well.

I've mingled (or perhaps mangled) several different archetypes here:
Odin, god of war, poetry,prophecy and magic in Norse myth traded his eye for a drink from Mimir's well, where the ancient wisdom of the frost giants was said to flow up from beneath the world tree Yggdrasil from the primordial void of Chaos.
A spriggan is a mostly malevolent spirit from Cornish folklore, generally found guarding treasure in burial mounds or the like, believed to be small ghosts of an earlier race of giants.
Cats, of course, were thought to be malignant, and often said to be familiars of witches or demons in medieval belief. Other cultures, such as the Ancient Egyptians, have held them sacred, and believed they possessed various magical qualities.

Special thanks to my son for the video he sent, which set me off on this particular trip, and to Brendan, for his input on the one-eyed god of the hanged.
Image: Cat on a Roof, by Ferdnando Botero, fair use via wikiart.org
Posted by hedgewitch at 12:00 AM 6 comments:

Email ThisBlogThis!Share to TwitterShare to FacebookShare to Pinterest
Labels: 2011, all hallows, beelzebub's bestiary, devil to pay and no pitch hot, faerie tales, odin, spirits of air and darkness 
The Terrorium
(transcription of a dream)

Behind dirty glass
the leaves are speckled
as an old man's hand,
yellowing veins, ropy stems.
A broken-backed rock
nailed in pain
at the shadows' end
is a cankered sling
for what crawls out at last
to preen and bask

with its blood-streaked eyes,
its drop-jaw mouth
engineered to split too wide
as it waits for its keeper
to bring the flies,
or sits fat and laps
at brain-colored worms
with a tongue
that's slit but still
holds fast.

And it asks
forever
no more than this:
to sit and swell,
to eat its fill
of all that crawls or
swims through filth
but
the box of glass
has grown too small,

the keeper's gone,
the thing's too huge,
the reptant tongue
too bent and long.

It lifts its head.
It jumps and falls
in a slime of jerks as
it scrabble-climbs
with its plague-toed feet
and bellied brine
up and back,
sideways and over,

quick and fell and hungry,
hungrier than ever.


Images are the property of the copyright holders. No infringement intended.

Email ThisBlogThis!Share to TwitterShare to FacebookShare to Pinterest
Labels: 2015, animal planet, creatures from the blue lagoon, dances with lizards, dystopian hallows, no intelligent lifeforms, these dreams 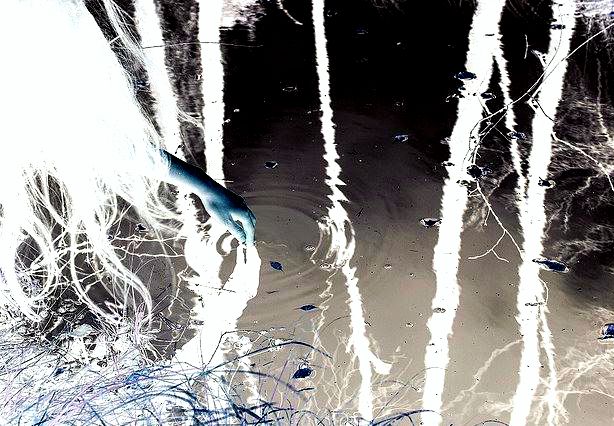 I cannot be
the Witch of Tides
with her greenalive
and mutable eyes
with her wavefoam curls
her saline sighs,
but only the constant
Crone of death's dust
where all things fall
because they must
when they've bled out to nothing
their sweet salt blood.

We meet in that place
neither sea nor shore;
the liminal wing, the liquidless pour
not wave nor field nor barren waste,
only a dead god's breathing face
on which we stand, the Witch and I
where three winds vie
to make the storm of rattle and fly
where the veil is rent,
where One and the Other
can mingle unkempt.

I cannot be
the Witch of Tides
whose toy is life
whose palette is clouds
whose hand is so wet,
but only the Crone of a
soft and dry
and whimsical
death.

Yet her blackened
inversion am I,
with my sandy surf
of dead glass and dry,
pushed and flung
like a moving eye,
tho the sweat it brings
is its only salt
except alkali.

We both have our wrecks
of sphinxes and ships,
of stones and decks,
of cities buried
with a murderer's care
for privacy to the ones we hide
shrouded in the swirl of our hair
as their world dies;

and who is to say
of the wet or the dry,
which was the Maiden
which was the Bride,
the constant Crone
or the wild Witch of Tides? 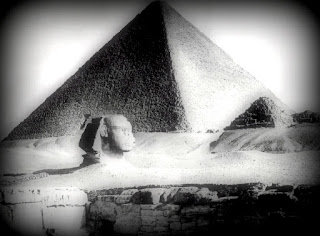