Bluejay's Wing
The first time I saw the sea, its reaching miles
of life and emptiness that twinned,
I was a barefoot child who thought
herself a woman, made of light
and incapable of sin.
The sea is high again today
with a thrilling flush of wind.
By day I scan the amber sky and feel
its cheapjack promise scratched upon my skin.
By night I scout the evercoming storm
with my bareback diamond eye
and heart of tin.
The sea is loud again today
with a spoken word of wind.
I see now how a palette rich with sun
bleaches out as monotone, greyscaled and thin,
its broken colors robbed of breathing light
as bluejays pale away on cloudy days,
their feathers keeping all the blue within.
The sea runs high again today
with a humming requiem of wind.
I'll never see again the dazzled tide;
my age is given to the prairie wind
but I won't believe I'll never see the sun,
or the mottled azure delicately brushed in
to point and praise a bluejay's cunning wing.
The sea is high again today
with a thrilling flush of wind.
March 2022 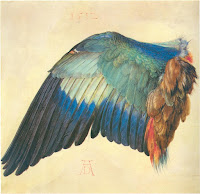 posted for dVerse Poets Poetics:
Opening Sentences
Note: My opening sentence appears in the last two lines of the first and final stanzas, and is from Justine, by Lawrence Durrell, the first book in his Alexandria Quartet, which I count among my top ten early influences in writing. And some may sense here another early influence, Emily Dickinson.
Images: Untitled, ©Zdzislaw Beksinski
Wing of a Blue Roller, 1512, © Albrecht Durer
Posted by hedgewitch at 11:24 AM 10 comments:

Song Of The Weavers 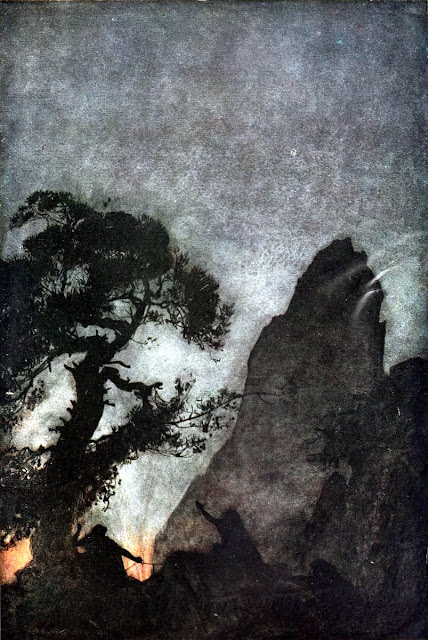 Song Of The Weavers
The Norns speak all they know
in pleaching and binding, in winding
on the spindle green thread from the Northlights,
white wool from the southern sugarmoon
as it sets in blood-orange dustfall.
Their rhythm curls out from
the tangleroot nest under the world tree
where they refresh the well
season to season, age to age, and all that was
and is to be is formed in their throats' call.
They have grown each feather
on the black raven's backs
of thought and memory
and taken the Allfather's eye
for their balladry.
A hard hand makes a rock-hard life,
but their cloud-boned fingers can weave
hard lives into blooms made to jump up in sheaves
as velvet as rabbits, full-hearted sweet
as the last peach on the summertree.
They fire the wicker man's burn
and rain his ash into the fields
to weep for the rye
they will color again
in May's breath-dancing fly.
I only sit under the cooling stars
in the holiness of night with the
owls' down floating, in the bright foundry of day
with the tongues of grass leaning
into the singing of their wild living cry.
March 2022 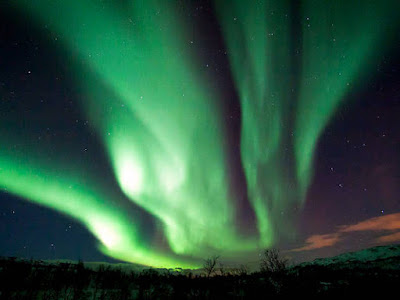 Email ThisBlogThis!Share to TwitterShare to FacebookShare to Pinterest
Labels: evening song, eyesight to the blind, green fire, Huginn and Muninn, rock and a harrowed place, the old gods' libations 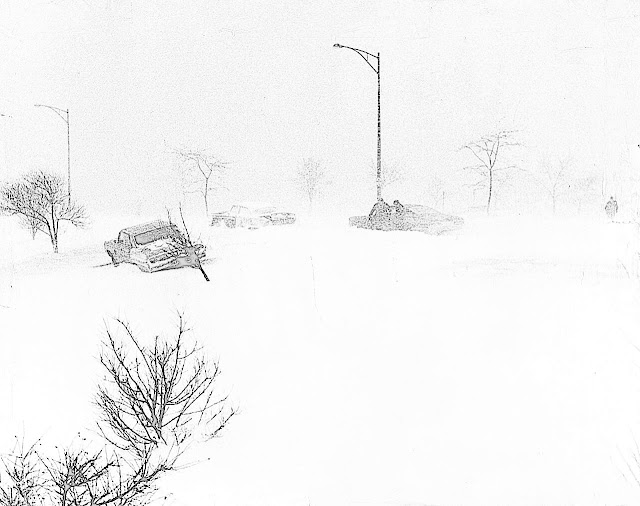 Soup Kitchen
After the blizzard
it was warm in the kitchen
where the angel-witch cooked.
All the survivors
crawled in from the avalanche:
the lost girls, bent heroines,
peacocks and choirboys,
pulled along by the wine
to canned soup and oranges,
looking for the revolution
that was always stillborn.
He was just another strategy
there in the churn
of dream-debris bobbing, plaintive
as old violins; scooped, angular,
scuffed but still thrumming.
His sorrows tempted me
but when I touched him
he growled
like a sore dog.
Finally the angel-witch
took him to Phoenix
and we were all stuck
with her snow and tomato soup.
March 2022
some nonsense for Shay's Word List #18:
Leonard Cohen
Note: My favorite song of Cohen's is the first I ever heard, Suzanne, released in '67. It was a part of this time I chose to write about, in particular, the blizzard of 1967, which I spent marooned in my best friend's apartment with J.J Cale's , the Doors' and Cohen's music, and a crowd of assorted misfits.
Some notes on the actual event:
"The Chicago blizzard of 1967 struck northeast Illinois and northwest Indiana on January 26–27, 1967, with a record-setting 23 inches ..snow fall in Chicago and its suburbs before the storm abated the next morning. As of January 2022, it remains the greatest snowfall in one storm in Chicago history..
The snow fell continuously in Chicago and surrounding areas from 5:02 am on Thursday, January 26 until 10:10 am Friday .. sources estimate [between] 20,000 - 50,000 cars and 800-1,100 buses [were]stranded...Gusts of 48 to 53 miles per hour..caused large snowdrifts..[and]..the blizzard closed both Midway Airport and O'Hare Airport. Ten-foot drifts covered the runways at Midway. Chicago Mayor Richard J. Daley ordered city workers to clear city streets around the clock..the city was virtually shut down and area schools were closed."~wikipedia
Images: Cars stranded at Oakwood entrance to Lakeshore Drive, manipulated, Fair Use
Volkswagon Beetle stuck in snowdrift at Stockton and Diversey, manipulated,  Fair Use
Both photos © the Chicago Tribune historical photos, January, 1967
Posted by hedgewitch at 10:41 AM 11 comments:

Email ThisBlogThis!Share to TwitterShare to FacebookShare to Pinterest
Labels: back in the long ago, backslider's wine, dreams of the snow spirit, friends and other strangers, history is mystery, snowjob, soul kitchen, witchlight 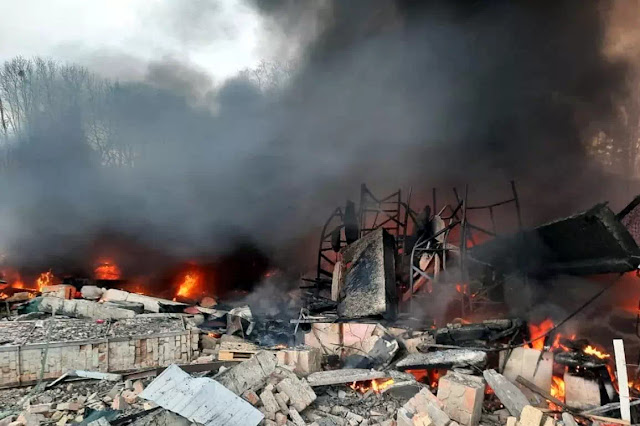 In the killing fine fabric
of inflorescent flame
we walk, we burn,
dwindling from kindling
to bullet-bruised smut
alone in a dark
our dying lights up.
Murderers in red
boil a soup from the dead
in our hollowed heads
hidden hired thugs move,
their inhalation our blood,
their exhale the air
where the fire fed.

Email ThisBlogThis!Share to TwitterShare to FacebookShare to Pinterest
Labels: 55, a pity we're a whore, hell is empty all the devils are here, no intelligent lifeforms, repost, smokescream

Home With The Diatoms 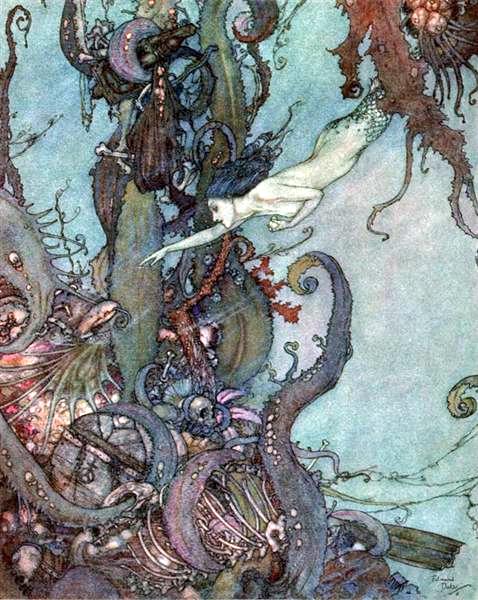 Home With The Diatoms
When I was a child
before sleep we prayed
for love to be shown, for safety to stay,
starved children in Korea to be saved.
Then the light would go off.
I'd put my real bed
of conches and nautilus twists
under the toss of the night's waves.
Regal on the seafloor
shells poked their bubbling heads
up out of snow-sand. Aquarelle fins and
gold-grey eye-globes blinked around me,
all greeted with a princess flip
of my green-scaled tail.
Reclined with coelacanths,
eyes blueing in my head,
all my mother-cut hair grown
long as a squid's arm,
I waited to swim into sleep,
watching the shadows of
far-above gulls mottle the green ceiling,
alone yet blanketed in
life watching over me, drowsing
to the epochs' stereopticon flash.
When we met in the deluge
you called in a lost language
for that nightspell to rise, to link us,
to sink us completely
in diatoms, wave after wave,
kissing underwater, not afraid to breathe
not afraid to drown, kelp-hair
in the undertow fanned and fluttered
summoned by a sea-fire of peace
to make ashes of fear.
March 2022 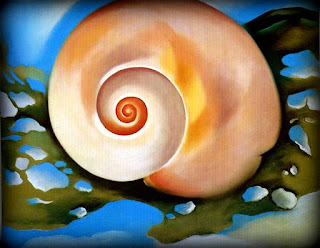 posted for earthweal's weekly challenge:
Shelter
Process note: "..Diatoms are unicellular [microalgae]: they occur either as solitary cells or in colonies, which can take the shape of ribbons, fans, zigzags, or stars..Living diatoms make up a significant portion of the Earth's biomass: they generate about 20 to 50 percent of the oxygen produced on the planet each year,  take in over 6.7 billion metric tons of silicon each year from the waters in which they live, and constitute nearly half of the organic material found in the oceans..."~wikipedia
Images: The Bright Liquid, © Edmond Dulac    Fair Use
Pink Shell With Sea Weed, 1937  © Georgia O'Keefe    Fair Use
Posted by hedgewitch at 11:51 AM 9 comments:

Email ThisBlogThis!Share to TwitterShare to FacebookShare to Pinterest
Labels: alchemy, beyond the sea, dances with coelacanths, fire of unknown origin, sanctuary, sea change, unsplitting the diatom, witchlight, won't you let me take you on a sea cruise 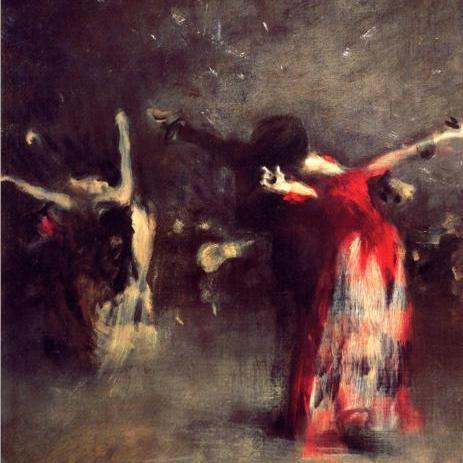 Après La Révolution
After the revolution we
became the aristos.
I fell in love with a
prince of the butterscotch castle
but I could never get past
the guillotine in his head, the wolf
hissing in his flock of noise,
the glitter-ship in his bottle
waiting each day to sail him away.
All the devils of summer
came to our parties, flashing
their ruby eyes in the dark, stealing
my stockings, hiding the postman,
eating the silverware. I made a centerpiece
from applecores, black horns and tail-spikes
and called it art diabolique.
When the winter night
finally flapped its starstained carpet
over the horizon, its patterns worn
and indistinct as we were, all
the stardust beaten out of us, I knew
we wouldn't make it to the end,
or even to France.
La révolution est morte.
Vive la révolution.
March 2022 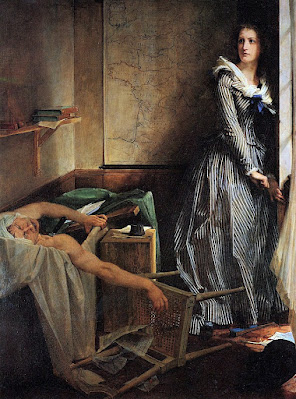