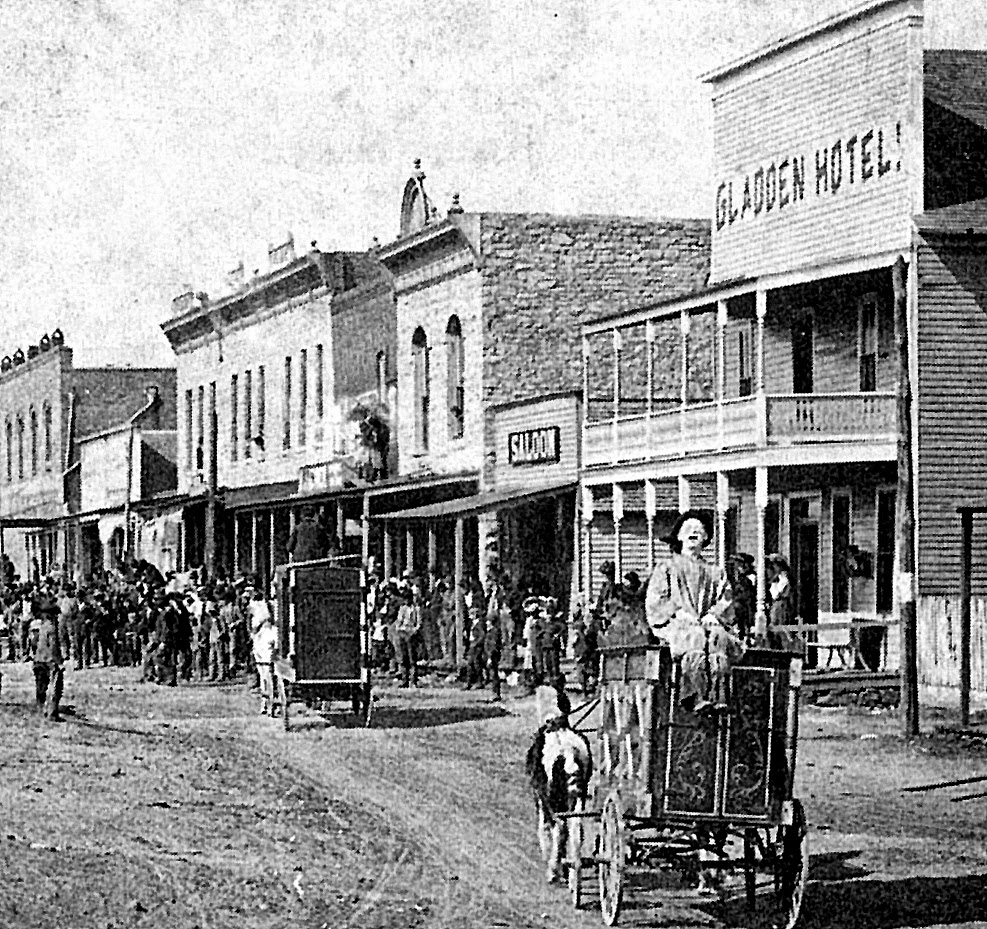 When the moon was a witchboat small and tossing
in the fade-time where night can see day as her twin,
down the red-dirt highway to Dead Woman's Crossing
came the carnival rolling on a dustbowl wind.
They spindled the midway, freakshow and toss-ring,
before they spiked twenty ripe melons with gin
for Harvest Home in the dark of September,
so the marks could do what they don't remember.
Then night seemed to give a coyote-moon cough
that shook her gold earrings, and Katie showed up
with her deathrattle tale of carnival past,
how she, the schoolmarm, met Fannie the Dove
how love like a cloudburst caught her at last
on a September midway, bent moon above;
a granite fist traded for a velvet hand
and a five dollar ring for her wedding band.

The Dove blew out of Texas like a broken branch
running  from Jesus, Daddy Jim and the law.
When she hit Mrs. Hamm's Saloon and Hog Ranch
she knew she had almost no time left at all
but still more than Katie, hellbound for a ditch,
face pale through the water where the black crows caw.
Thru plugged ears the Dove hears the walking night moan,
thru shut eyes sees the bridge where Katie talks on.

The heat lightning flickered as midnight slammed shut,
Kate woke from a nightmare where she was the wheat
waiting dry in the dirt for the thresher's cut,
for the whiskey hard times in tangled sheets,
for one scar too many from a White Owl blunt
while the tumbleweeds wrote her name in the street.
She put on her bonnet, she packed up her grip,
met the Dove smiling with her child on her hip.

They posed stiff as strangers on the early train,
the nights and the men left behind in the dust.
They got off at Clinton in the quick July rain
with the last of the wheat burning red as rust.
When the moon was a witchboat sailing the plains,
as diamond eyes smiled into lily-white trust
in the carnival night, storm in the willow,
the teacher slept sweet with her red-haired pillow.

The next day at midday, two girls and a child
left town in a buggy to laugh and laugh last.
Fannie screamed like a bobcat, the wind went wild;
Katie's man rode up through the tall sawgrass.
The Dove saw the buck-knife draw a cutthroat grin;
all she knew was to make the scared horse run fast
from the man who had Katie, all his, all dead,
while the Dove had poison and a red dirt bed.

When the moon's a hook, a witchboat, a sickle
when the last of the wheat stands brown in the ground
while Orion runs after Hecate the fickle
above the dwindling lights of a dying town,
the Dove does her dance to a penny whistle
and a dead woman calls her child with that sound.
Now every fall when the carnival tops the ridge
it rolls without stopping past Dead Woman's bridge. 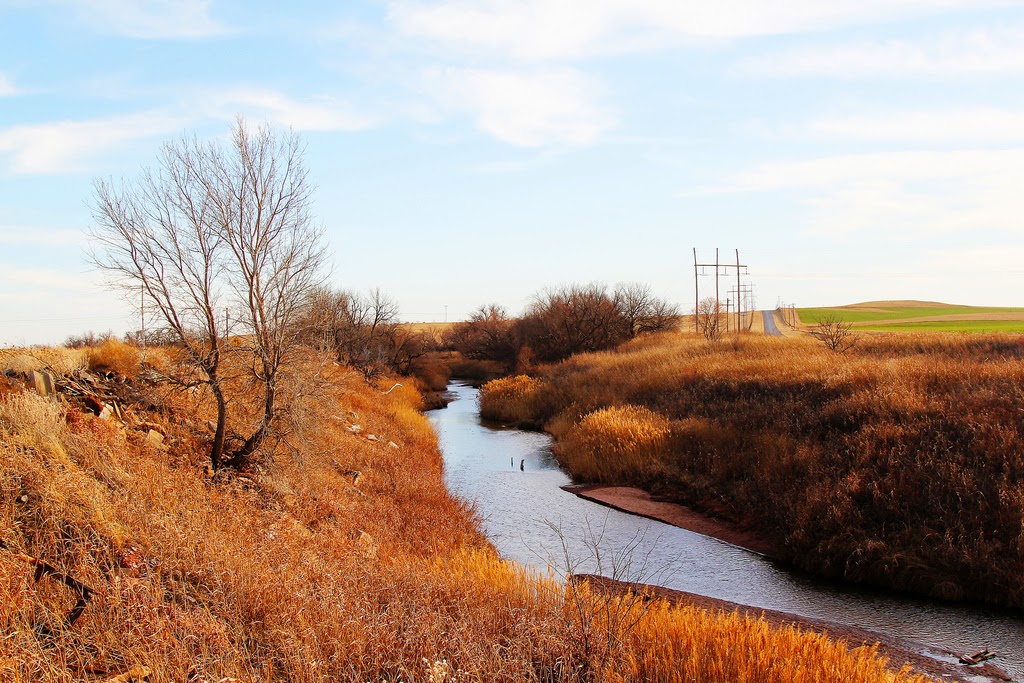 This poem is written in the ottava rima form, with lines of eleven syllables. Or tries to be. It has been edited extensively.

Process notes: Dead Woman's Crossing, also called Dead Women Crossing, refers both to a small community by that name in Custer County, Oklahoma near Weatherford, and the nearby bridge over Deer Creek where the decapitated body of schoolteacher Katie De Witt James was found in August of 1905. The events (other than my imaginary carnival) described in this story are factual up to a point, with completely fictitious biographical details and explanations of my own invention. You can get the details (as far as actually known) of the unsolved murder of Katie De Witt James and the poisoning of Fannie Norton here in this wikipedia article.

'Grip' is an archaic word for a small traveling bag. Prostitutes of that era were often referred to euphemistically as 'Soiled Doves,' a term also used to describe women who had lost their virginity, were free with their sexual favors or considered  loose morally. White Owl cigars, including 'blunts' are an inexpensive brand that has been made in the South since 1887. They have about the same place in cigar hierarchy as Swisher Sweets (once my own occasional brand.)

Fannie Norton did use the name 'Mrs Ham,' but the eponymous Saloon and Hog Ranch is a flight of my fancy taken loosely from the life of Calamity Jane, who in her youth is reputed to have been a working girl at the infamous Fort Laramie Three Mile Hog Ranch, a 19th century 'military brothel' and stage coach stop near Fort Laramie, Wyoming, also said, like Dead Woman's Crossing, to be haunted.

Posted by hedgewitch at 8:09 AM

Email ThisBlogThis!Share to TwitterShare to FacebookShare to Pinterest
Labels: 2014, 2016, all hallows, book of the dead, repost

Rose With Stars And The Turning Year 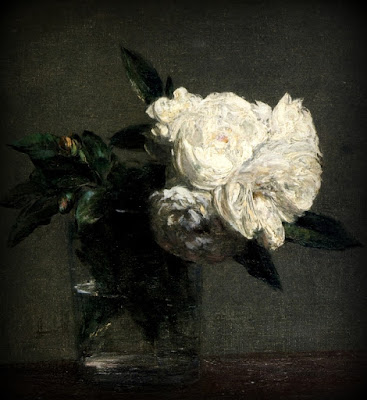 Rose With Stars And The Turning Year


The stars mind their own
business. The wind runs grasping
up and down the night

arms stretched,
thrashing the impassive trees
with its flapping desire.

Here below: only a bickering
of whelps, the sinuous peristalsis
of the snake, the mechanical revolve

of all his poison-spitting brethren
churning and contracting,
knocking the Parthenon down

and your hand, poised, your voice
whispering, your eyes that watch and shine
on every petaling memory made

of the rose under windy stars
pinning the mind
close to her fragrance by her thorn.

The year turns
with a flash in darkness,
an onslaught of velvet;

a last
loose ruby shut away
in a box.

In Honor Of The Season 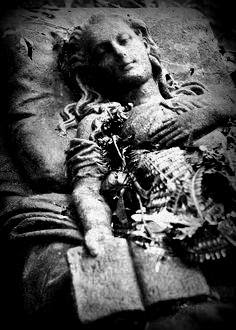 Here once, through an alley Titanic,
Of cypress, I roamed with my Soul—
Of cypress, with Psyche, my Soul.
These were days when my heart was volcanic
As the scoriac rivers that roll—
As the lavas that restlessly roll
Their sulphurous currents down Yaanek
In the ultimate climes of the pole—
That groan as they roll down Mount Yaanek
In the realms of the boreal pole.

Our talk had been serious and sober,
But our thoughts they were palsied and sere—
Our memories were treacherous and sere—
For we knew not the month was October,
And we marked not the night of the year—
(Ah, night of all nights in the year!)
We noted not the dim lake of Auber—
(Though once we had journeyed down here)—
We remembered not the dank tarn of Auber,
Nor the ghoul-haunted woodland of Weir.

And now, as the night was senescent
And star-dials pointed to morn—
As the star-dials hinted of morn—
At the end of our path a liquescent
And nebulous lustre was born,
Out of which a miraculous crescent
Arose with a duplicate horn—
Astarte's bediamonded crescent
Distinct with its duplicate horn.

And I said—"She is warmer than Dian:
She rolls through an ether of sighs—
She revels in a region of sighs:
She has seen that the tears are not dry on
These cheeks, where the worm never dies,
And has come past the stars of the Lion
To point us the path to the skies—
To the Lethean peace of the skies—
Come up, in despite of the Lion,
To shine on us with her bright eyes—
Come up through the lair of the Lion,
With love in her luminous eyes."

I replied—"This is nothing but dreaming:
Let us on by this tremulous light!
Let us bathe in this crystalline light!
Its Sybilic splendor is beaming
With Hope and in Beauty to-night:—
See!—it flickers up the sky through the night!
Ah, we safely may trust to its gleaming,
And be sure it will lead us aright—
We safely may trust to a gleaming
That cannot but guide us aright,
Since it flickers up to Heaven through the night."

Thus I pacified Psyche and kissed her,
And tempted her out of her gloom—
And conquered her scruples and gloom:
And we passed to the end of the vista,
But were stopped by the door of a tomb—
By the door of a legended tomb;
And I said—"What is written, sweet sister,
On the door of this legended tomb?"
She replied—"Ulalume—Ulalume—
'Tis the vault of thy lost Ulalume!"

Then my heart it grew ashen and sober
As the leaves that were crispèd and sere—
As the leaves that were withering and sere,
And I cried—"It was surely October
On this very night of last year
That I journeyed—I journeyed down here—
That I brought a dread burden down here—
On this night of all nights in the year,
Oh, what demon has tempted me here?
Well I know, now, this dim lake of Auber—
This misty mid region of Weir—
Well I know, now, this dank tarn of Auber—
In the ghoul-haunted woodland of Weir." 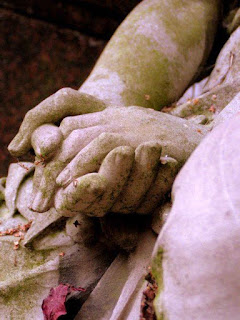 My favorite seasonal poem by Edgar Allan Poe, published here many times, but for me it never gets old. Best All Hallows wishes to all.


Images: Cemetery statuary, via the internet 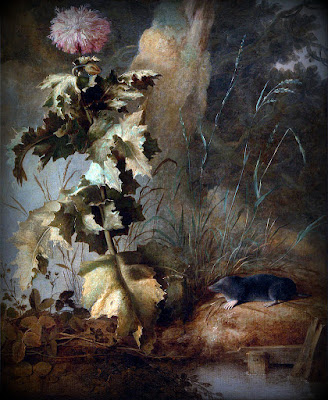 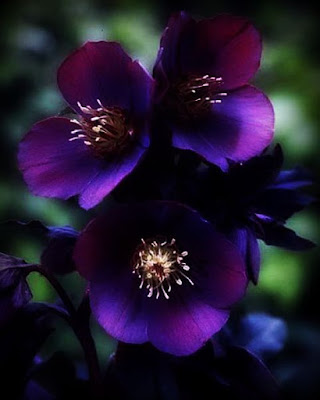 The wind is hoarse
with words of the north.
Mother of columbine,
green twist of turpentine
over the ice,

lace scratch of voles
cabling the snow,
wild-knitted life on needles of bone;
a whole that eats parts,

a breathing of graves,
a wide-open door

and under the hellebore,
your gold heart.