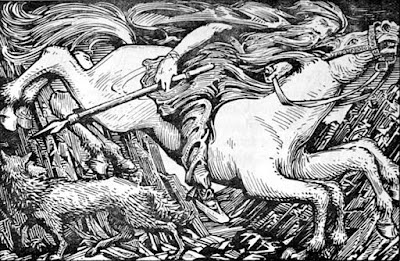 So I found, said her blackened lips,
that cold is a serpent that holds, pushing its
ribbon-chest deep into mountain,
slow-cracking the heads of spirits within
for gold to brighten its rippling scales.
Will you hear more?

So I saw, moved her fleshless jaw,
that cold will grow wide and thicken,
dead weight in grey-white armor,
dead mouth kissing every shoulder,
that the tree it blasts and circles
will shake down a harvest of lives
to grind out all you love.

So I found, rattled her dustdry throat,
that cold will make red daggers, hanging
scarlet borrowed blood to temper
oblivion's poppy snowflakes,
to pierce the heart of hearts
till red and white alike
vanish from sight.

Then the One-Eyed shucked his Hel-shoes
jumped back in Sleipnir's saddle,
and fled the Ninth World,
where words torn from the dead
had frozen on his tongue.

Posted by hedgewitch at 6:37 AM