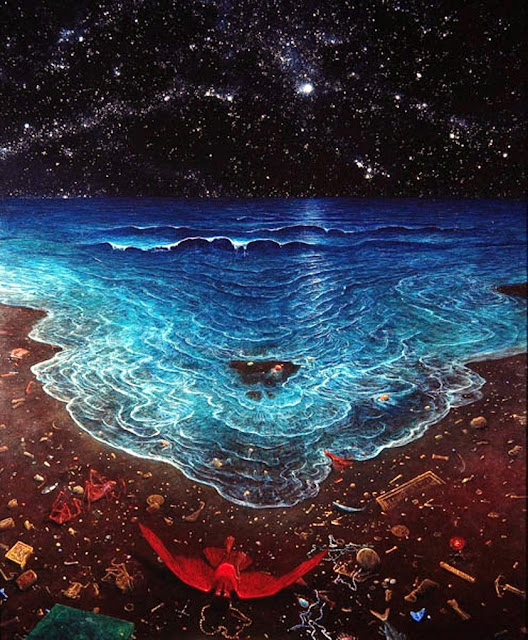 The moon mocks a sailor
on the surface, bobbing and breeching.
Boiling in darkness
the sweet arch of coral
clings with its bones to the breast of a giant,
crumbling to a legend
in its poison bath.

The antic fishes
with their calico colors
paint fading murals in a
melting palace, then rise grey
in their bloat to bleach clouded tides.
The sun's spear drives home
through a broken shield

splits the skin of the ice
so it roams without purpose,
a white wolf with Fenrir's breath
that moving southward slowly starves.
In this wreckage and wrack that's the prize for destroyers
who sold all their flowers to dance in an oil slick
and all the world had

for the price of
a mess of pottage, is there one soul left
who can make a new day?

Process note: "A mess of pottage is something immediately attractive but of little value taken foolishly and carelessly in exchange for something more distant and perhaps less tangible but immensely more valuable. The phrase alludes to Esau's sale of his birthright for a meal ("mess") of lentil stew ("pottage") in Genesis 25:29-34 and connotes shortsightedness and misplaced priorities..."~wikipedia