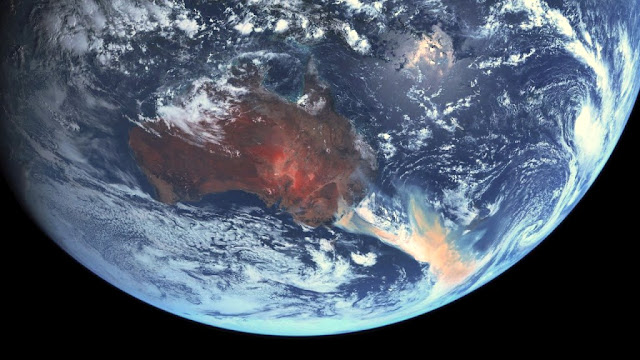 While a continent becomes a sore
spreading to shingle the destitute globe,
we lie wrapped in broiling
blinded abeyance, knee-jerking a galvanic
response that is only more of nothing.
The colossus god-thief's

gone small as a pea no longer green
beside his golden foundry,
abandoned like a warped wheel
murdered by its own machine,
shamed to a face in a clockwork locket
that's dropped too hot on a

cowskulled outback
where fire tornadoes are the new djinns
where the breath of burned brush leaves
a path of smoking cinder,
where even the dirt
is beginning to burn.

We are the thing that un-cocks
the flower gun, whose apocalypse hand
knifemelts the Mother, making
her bleed a drowning of ice-water tides,
the mad un-scientists who breed
the firebird to rise and rise again.

We are numberless now, an ashslide of rapists
pressing our weight against a mouth that would be willing
if only it could breathe.

~March 2013
(originally written as quite a different poem)

Image: Photograph via internet, showing the Australian wildfires of 2019/20 from space. Fair Use

Email ThisBlogThis!Share to TwitterShare to FacebookShare to Pinterest
Labels: 2020, book of the dead, burn out the day, fire of unknown origin, last dance with the phoenix, the old gods laugh