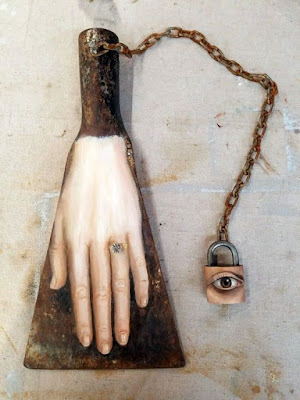 The girl who grew old
in her sleep keeps her eyes
on a chain, afraid to let them loose
from the fingerwork of dreams,
stringing the beads of her sanity.

The machinery must turn, not
roam across every face
of cruelty, of beauty, that
comes now in the crowd
whose Fahrenheit flies

towards the boiling heart of the sun.
Voices with stones, medicine hands
on eyes seared blind in acid clouds;
gunshot, brickbat and burning
sweep our shuddering house.

Tiny assassins make up
the bed where we fear to lie down
with our dusty farewells.
The crone bleeds hidden
gold watering her marigolds,

sees again in the glinting blue stream
the great ouroboros return;
Jörmungandr opens his mouth
to lash his tail and break oceans.
Now is the time for devouring

as Fenris howls
for the gods to come out and die. 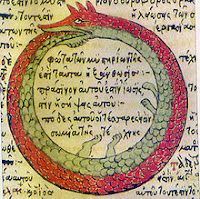 Process note: "In Norse mythology, Jörmungandr.. is a sea serpent, the middle child of the giantess Angrboða and Loki. According to the Prose Edda, Odin took Loki's three children by Angrboða—the wolf Fenrir, Hel, and Jörmungandr—and tossed Jörmungandr into the great ocean that encircles Midgard[our human world.]The serpent grew so large that it was able to surround the earth and grasp its own tail. .. When it releases its tail, Ragnarök [the last destroying battle of the old world, translated as Twilight or Doom of the Gods] will begin.  Jörmungandr is an example of an ouroboros,...an ancient symbol depicting a serpent or dragon eating its own tail..The ouroboros is often interpreted as a symbol for eternal cyclic renewal or a cycle of life, death, and rebirth..." ~wikipedia, condensed.

Email ThisBlogThis!Share to TwitterShare to FacebookShare to Pinterest
Labels: 2020, dances with sea snakes, darkness, end of days, flowers of Dorian Gray, hell is empty all the demons are here, mythical beasts, ragnarök, the old gods bleed