Off the Shelf Archive ~April

Sadly, the Archivist was much taken up during the month of April with writing a poem a day for National Poetry Month (in company with the talented poets Ami Mattison, Brian Miller, Patricia Caspers, and the inimitable Fireblossom, who all gave tons of support.) Therefore, the page known as Off the Shelf, where  the intriguing works of the mostly Dead Poets I fancy are showcased, was allowed to get quite dusty and neglected.
But a new month is here, and a new selection makes it's appearance at last. This is a poem I first read in my late teens that made quite an impression on me, a classic of its kind from a writer who's celebrated perhaps more than he's read these days, the great American poet Robert Frost. It's a fey piece called The Hill Wife, and has always been my favorite work of Frost's.
You'll find it here, in the Off the Shelf Archives.

As always, feel free to comment on either the current or prior selection here, as comments are disabled off the main page.
Now, before it goes into the vault of time, here's a last look at the selection that's been sitting on the shelf all April, an excerpt from  The Genie of the Beach, by the Lebanese poet Khalil Hawi, and my review of the book in which it appears translated: 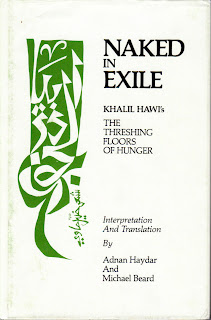 Review:
Naked in Exile, Khalil Hawi’s The Threshing Floors of Hunger
Interpretation and Translation by Adnan Haydar and Michael Beard,
© Adnan Haydar & Michael Beard, 1984, Three Continents Press.
All rights reserved.
First, a portion of one of the poems included, Hawi's The Genie of the Beach:
The Genie of the Beach
I.                  Gypsy Tents
That’s All I’ve ever been—a dark-skinned girl
In gypsy tents that have no land, no pegs,
No chattels that impede, that carried by the wind
Sail on beyond the season’s feasting days,
And land on wayward roads from feast to feast.
The wind wipes out the traces that are left
From flames and revels round the gypsy tents.
II.              Mountain Stags and Horses of the Sea
And what has there been incarnate in my flesh
Except the nature of the mellow sand,
The thirsty sand yearning with lusty want
For the outrageous fury of the waves
Which furrow and assault the beaches and the straits?
Will echoes haunt me from their mountain range?
There on the coasts of the primeval snow
The shades of poplar burned my flesh;
Their verdant branches left unveiled
Fermented embers in my depths.
And feverish visions I beheld all day;
Things in the ponds of boiling blood,
Dim shapes in rising steam are veiled,
A raging stag looms into sight,
Rubbing its eyes blood red, routing the herd.
Will I be trampled by the raging stags?
My body moans, it cringes, pants, becomes
Mere fodder, meadows, verdant fields.
The wild mint wallows in the crannied mountain foot,
And in my valleys, groves of pansies throng,
Both frenzied stags in wild abandonment
And horses of the sea surge through the pansied fields,
And galloping they race into the bay
Urged by their frothing mates, thrusting their way along,
Yet there remains within the tender flesh
The mirror's clearness and the glowing tan
Of tranquil rip'ning clusters of the vine,
Trodden by gales, yet unaffected still.
III.           In the City
And in the city’s night, what have I been
Except the harvest feast on threshing floors,
Except the apple of the fertile wild?
I offered of my flesh: blood, wine and bread.
And I beheld with great perplexity
A body plied and squeezed by fetters ten.
What could it feed on but its fever's sweat
To make it shoot and bud and carry fruit?
~Khalil Hawi
Translation © Adnan Haydar and Michael Beard
~from Naked in Exile, Khalil Hawi’s The Threshing Floors of Hunger Interpretation and Translation by Adnan Haydar and Michael Beard,
© Adnan Haydar & Michael Beard, 1984, Three Continents Press. All rights reserved.
You'll find this poem in its entirety along with several others and a great deal of insightful explanation and critique in Naked in Exile. The book contains three major poems by Hawi, The Cave, The Genie of the Beach, and Lazarus 1962. All are given in both the original Arabic and in English translation, section by section on facing pages.
As far as someone with no knowledge of Arabic can tell,the poems are meticulously and sonorously translated by the authors, rendered in a meter also reconfigured and 'translated' so as to be readily understood  by the Western ear, and then put in an intelligent and complex historical perspective, with additional in-depth but clear and readable analysis and discussion of each, as well as their place in the timeline of Hawi’s life and work unfolding in the period of the Lebanese Civil War. Hawi's own interpretations and introductions are included, and the authors also scrupulously go over and examine existing interpretations of the poems from an assortment of critics, as well as present their own.
Of his suicide, the authors of Naked in Exile  write: " His death was one of very many civilian casualties which accompanied that military occupation. If we single him out, it is because his life work supplies a voice for the many thousand silent victims... Hawi's death is...that of a thinker who wanted nothing better than an opportunity to escape his own pessimism (and who sometimes...succeeded)...[and] who was so totally unequipped with the defenses most of us put into play at the sight of suffering in others that he simply found himself unable to witness such suffering again."
I greatly enjoyed this scholarly and professional work which still manages to so skillfully convey the dark,layered, intensely mystical and lyrical quality of the poetry of Khalil Hawi. It 's available at both Barnes and Noble and Amazon.
Disclosure—I bought and read this book on my own dime and initiative, and received no compensation for this review.
Bayadir al-ju is the original Arabic title of this collection as used by Hawi for the 1965 Beirut publication.


I wrote more about this selection back in March in this post.

Posted by hedgewitch at 3:18 AM