Ghosts go hungry
at Versailles. 'Let them
eat cake,' the custodian mumbles.
Marie-Antoinette tries to bake
but flour falls through her fingers
dust to milky dust.
Marie starts the minuet.
Diamonds drop off the
Shepherdess like old flesh.
'Les riches, she murmurs,
are not quitters.'
In the Labyrinthe,
fables dehydrate.
The custodian
watches World Cup.
November 2022 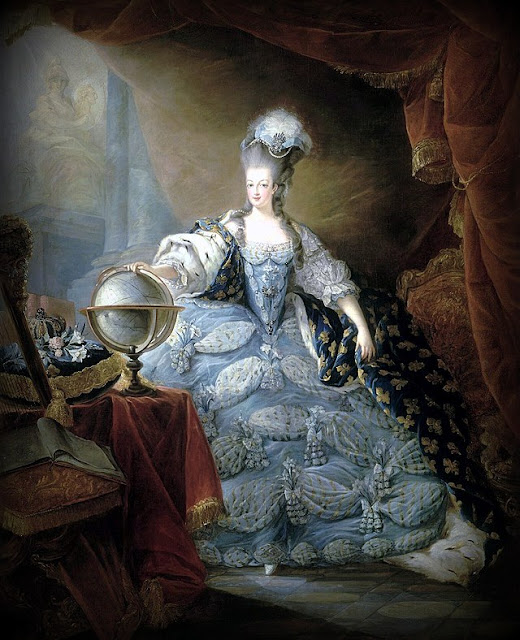 a little historical nonsense
posted for
Word Garden Word List:Ghost Eaters
Notes: Marie-Antoinette and her waiting women often dressed as Shepherdesses and played at being country peasants in the elaborate gardens of Versailles.
Regarding the Labryrinthe, or Bosquet de la Reine at Versailles:
"In 1665, André Le Nôtre planned a hedge maze of unadorned paths in an area south of the Latona Fountain near the Orangerie.. In 1669, Charles Perrault – author of the Mother Goose Tales – advised Louis XIV to remodel the Labyrinthe in such a way as to serve the Dauphin's education..Le Nôtre redesigned the Labyrinthe to feature thirty-nine fountains that depicted stories from Aesop's Fables..accompanied by a plaque on which the fable was printed..in verse..; from these plaques, Louis XIV's son learned to read..[C]ompleted in 1677, the Labyrinthe contained thirty-nine fountains with 333 painted metal animal sculptures. The water for the elaborate waterworks was conveyed from the Seine..[and used by].. fourteen water-wheels driving 253 pumps.. Citing repair and maintenance costs, Louis XVI ordered the Labyrinthe demolished in 1778. In its place, an arboretum of exotic trees was planted as an English-styled garden. Rechristened Bosquet de la Reine, it would be in this part of the garden that an episode of the Affair of the Diamond Necklace, which compromised Marie-Antoinette, transpired in 1785..."~wikipedia
France is defending champion for the 2022 World Cup.
Images:  L'Entrée du bosquet du Labyrinthe, © Jean Cotelle le Jeune (1642-1708) Public Domain
Marie-Antoinette Queen of France 1775 ©Jean Baptiste Gautier Dagoty
Posted by hedgewitch at 10:19 AM

Email ThisBlogThis!Share to TwitterShare to FacebookShare to Pinterest
Labels: danse macabre, eat the rich, for the g-man, friday 55, ghost story, tedious plea for truth, the paradise of the rich is made from the hell of the poor