Lion And Ravens With Unsettled Sun 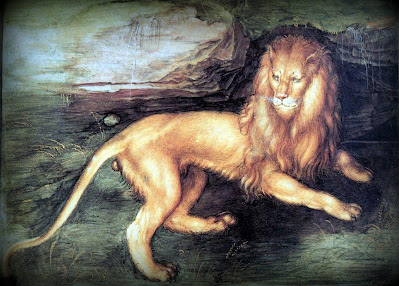 "..It is a wheel, the rays /around the sun. The wheel survives the myths/The fire eye in the clouds survives the gods.."

Two ravens circling in a spotless sky
on a warning wind with fire on its breath
soft but dangerous as a lion's hiss,
in dead grass gathered to burn a phantom's past
that now in turn burns us.
A feast of the senses is just
another place to die among strangers
hearing the hiss of lions trapped
in a body devouring itself
in camera, the dark heart.
Best to fall to the sudden sharp sword
of the god's divine panic, danced to dust
under his dusky foot, his pipes hissing like a lion,
a screech and flutter of ravens at the window.
Light is sliced to crescents dazzling at the edge;
nothing but the sun survives the myths.
The lion has no wheel behind his hiss.
Ravens flow in the tempest and its drum,
dark lettering spelling out the ride to come.
November 2022 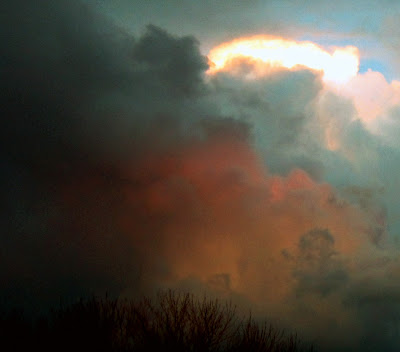 posted for
Word Garden Word List
and
earthweal's
Open Link Weekend # 142
Note: The Word List this week is taken from the works of Jim Morrison. He has always reminded me of a lion in figure and impact, though perhaps a bit more prone to roar than hiss. I've been reading Stevens again lately and somehow he got tangled up here, with more of a sun king's than lizard king's flare.
[lyrics begin at 1:12 mins]
Images: Lion, 1492, by Albrecht Durer   Public Domain
Samhain Night 2014, ©joyannjones
Posted by hedgewitch at 9:52 AM

Email ThisBlogThis!Share to TwitterShare to FacebookShare to Pinterest
Labels: beelzebub's bestiary, blue dark, dances with corvids, friends and other strangers, Huginn and Muninn, the old gods laugh, won't forget to put roses on your grave, your lion eyes