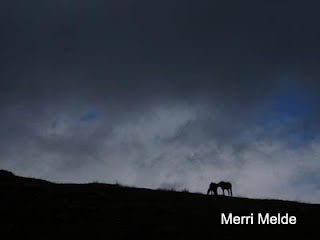 The fire's burned low and the coffee's all gone,
the biscuits are dry and the stars pushing dawn.
I lay on my back in this cold desert waste
wondering why every star has your face.

The cattle are restless when the wind's out of tune.
Clouds tug up their bandana and cover the moon.
It's a bandit's mask, and the eyeholes are black
with emptiness cold as a shot in the back.

The fire's burned out, and the cook's waking up
to make coffee so bitter it might break the cup.
I'm still laying here and I still feel the same,
wondering why every cloud has your name. 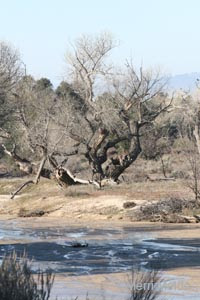 posted for   real toads
Challenge: Cowboy Poetry with Margaret
The multi-talented Margaret Bednar has brought together two perfect ingredients, cowboy poetry, and the photography of Merri Melde (@ The Equestrian Vagabond.) Thanks, Merri, for letting us work from your striking photography.

Though  I grew up in Chicago, forty years here in the Dustbowl have left me pretty Okyfied. And like the song says, my heroes have always been cowboys. I've borrowed the cadence and a phrase or two for this very derivative poem of mine from an old Utah Phillips song,  about an old chuckwagon cook('the old woman,' a term of affectionate derision for a cowboy who can't cowboy any more, but can't leave the trail, either, so stays on to cook for the hands) on the Goodnight-Loving cattle trail, named after Charles Goodnight and Oliver Loving, which I first heard in the No Exit Cafe in Chicago, sung by folksinger Art Thieme.

Here it is, sung by one of the great American cowboys, Chris LeDoux:

Since we're doing cowboy songs, here's another one Artie used to sing, by Cisco Houston, who often sang  beside Woody Guthrie, back before they put the country in western, then took it out again. It sounds rather dated now, but that's part of its charm (for me, anyway.) I think both these songs are better cowboy poetry than my effort, which is definitely 'Lite!'--but I did want to play with this challenge of Margaret's and the  photos by Merri.

"As he fell his hand was grabbin for the gun he'd get too late/with the notches on it showin' like the vagaries of fate..."

Email ThisBlogThis!Share to TwitterShare to FacebookShare to Pinterest
Labels: 2013, blue moon, even cowgirls get the blues, evening song, real toads