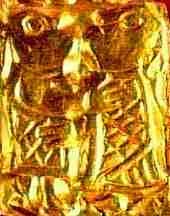 
Nine worlds walk
in the count of all things:
one for fire and smoke
one for mist and ice;
two were made for the gods of life
and change, one for cold death, another
for the dark in the Dripping Hall,
one for the bright ones beneath the Fair Roof;
one for the giants where all things begin,
one pulled out complete for the time of men.

The Seer came traveling
over each one by one. She sought
the spinning, the Well and the Tree;
the farther shores, the other skies
where the dancing of wheat
and mollusks meet
where the wise one dies
choked in his thoughts
to brew the robbed mead
of gods and skalds.

From the Old Ones she learned
the names for all things:
the Ways, the Weaver
the Wind's Kite of Clouds,
the Hush and Wave
of sea and calm air,
Wildfire, green Wand,
the flying Seed
and the Foaming that steals
away sense and care.

She traveled each world
high to deep, end to end
till her closed eye could see
where all traveling ascends,
where the moon's mare runs wild
at last wolf-free,
where Lif and Lifthrasir
have found the Tree
in the Tenth World's
pine-candled sanctuary.

Fireblossom Friday: Another You
The  incomparable and incendiary Fireblossom (Shay's Word Garden) asks us to imagine another world on which there is another you; I have gone a bit overboard by imagining ten worlds, but at least only one hedgewitchian alter-ego. (And she did most generously say, 'Really, anything the clip inspires you to write will be okay.' so that'll larn her.) Thanks to all who have the patience to wade through my mythological self-indulgence.


Process Notes: To cite everything I've dismantled from Norse mythology here would be an exercise even longer than the poem, but below you will find at least a few high points, with some explanatory links to wikipedia. Please don't feel you have to read any of this unless you are so inclined:

Norse mythology posits at least six 'homeworlds' and the Poetic Edda lists nine, which I have cataloged in stanza one.
In stanza two, The Well is Mimir's, and the Tree is Yggdrasil.  Skald is the old Norse for scholar, or poet. I also refer to the myth of Kvasir, the 'man who knew all the answers' and his demise at the hands of the dwarves who murdered him, then told the gods he had suffocated in his own intelligence (details can be found here, ) as well as Odin's theft of the resultant Mead of Poetry (here.) I will just quote this one part, because I love it:" Odin [spat his loot out quickly into containers placed by the Aesir]. But Suttung was so close.. that ..some drop[ped] backwards. Anybody could drink this part, which is known as the "rhymester's share"... But the [true] mead of poetry was given by Odin to the gods and to the [skalds ...]"
Stanza three, again plundering the Poetic Edda, has the names given by the Vanir (the oldest Norse gods, thought possibly to be originally Indo-European deities of magic, nature and fertility) to the world and various things in it: Earth(the Ways) Heaven(the Weaver) Ale(the Foaming) wind, clouds, sea, etc.
Stanza four refers to Lif and Lifthrasir, who shelter in a protected wood called Hoddmímis holt, and are the Adam and Eve-like couple chosen to repopulate the earth after  ragnarök.   I have invented the phrase 'Tenth World' as a name for whatever might exist then, after the old gods and old worlds have passed.

Image: An amulet of gold from the Iron Age, thought to depict the Vanir Freyr and his wife the giantess Gerth(Geror,Gerd) Public domain  via wikimedia commons