Dream Of The Golden Monkey 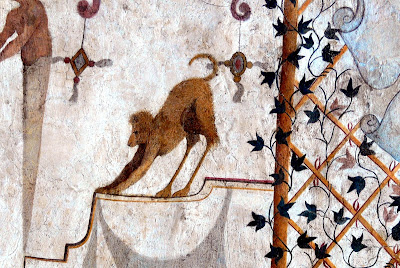 Dream Of The Golden Monkey

It was the time
of the Golden Monkey, dancing
down a stairway of petals and coins;
a flourescent idyl of creamery light
sinking sweetly into the indigo cup
of black coffee night.

We reached up to
the little gold god as He dropped
a basket of yellow-eyed anemones;
He was more real than the Golden Calf
(of which you'd politely taken half,
when I'd refused to eat.)

A voice in
my monkey mind
laughed and told the rose
to fold me in her clothes;
when I picked the lily's child, she gave
no more fragrance than your smile

while the Monkey blinked His
peonie-pink eyes, quite pleased
to caper despite His fall,
lightly balanced on a gracile haunch
just one opposable thumb away
from the Golden Branch.

So we sat for
an age between day
and past,
beneath the swinging sign at last
of the Golden Monkey,
flowers in our pockets, pollen on our lips

watching the moon reflect His shine,
gilding the curled petals floating
on our summer-flowering wine. 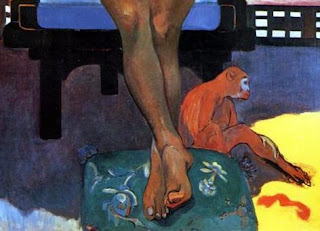 Challenge: Floral Explosion
Susie Clevenger (Confessions of a Laundry Goddess) showed us some images of an amazing rainfall of flower petals flooding an area near the Irazú Volcano in Costa Rica as a promotion. Stunning.
I'm not exactly sure how this poem appeared out of that, except to say it was originally a dream, and therefore hopefully doesn't require a logical explanation.


Process notes: The Golden Branch is a French fairytale about the sometimes illusory but transformative powers of desire, and also a play on the title of Sir James Frazer's comparative study of myth and religion, The Golden Bough. Zen often refers to the distractions of our senses and superficial thoughts and desires as the monkey mind.

Posted by hedgewitch at 4:26 PM