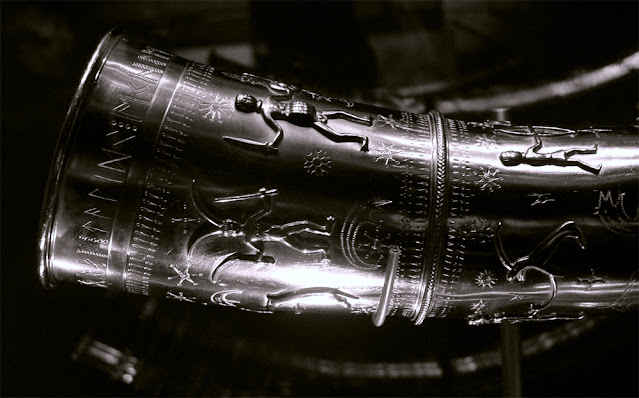 Odin's Mead
I am not a jewel
fashioned for your collection
nor the paint-pot
for your ever-moving lips,
not the fertility
to your futility
not assumed erudition
to your chosen perdition.
I am not meant for
your wound of a mouth
bleeding hate-kindling for fire-hags
flaming sweet summer-country,
not the heart-stake
vitriol will make,
not victory to be claimed
in a war too dirty to name.
I'm only the last
taste in the drinking horn
of some bright thing Other
a soft-foot step and fleet hand
pouring drunken snow
brewed by Ones who go
on spirit bones far stronger
but here walk free no longer.
I am only the bite
of the berry
dropping seeds from the bramble,
a tart taste in a season
of falling farewells,
a sapphire flicker
brief in the blue mirror,
a gesturing ghost's fever
behind you forever;
a thrum too low to be clear
that only the silenced can hear.
October 2022
posted for earthweal's
Kindling From The Forest Of Light And Shadow
Note: I've recounted this myth before, but briefly to recap, in Norse mythology, the Poetic Mead or Mead of Poetry is a magical beverage made from the murdered body of a being created from the gods' spit which sealed the truce of the Aesir-Vanir war, and was stolen from the  jötnar guarding it by Odin in eagle form, who spits it out into sacred  golden vessels for those chosen by the gods. Whoever drinks from these is given the gifts of poetry and knowledge, and is transformed into a skald and scholar. Odin also releases some of the mead in his droppings as he flies. This anyone can drink, and is called 'the rhymester's share."
Images: One of the golden horns of Gallehus, public domain
"The Gotlandic image stone Hammars (III). It is held to depict Odin in his eagle fetch (note the eagle's beard), Gunnlöð (holding the mead of poetry) and Suttungr." public domain
Posted by hedgewitch at 11:08 AM

Email ThisBlogThis!Share to TwitterShare to FacebookShare to Pinterest
Labels: all hallows, ghosts in the machine, gone before, kiss my poetic ass, spirits of air and darkness, the old gods' libations, witchlight