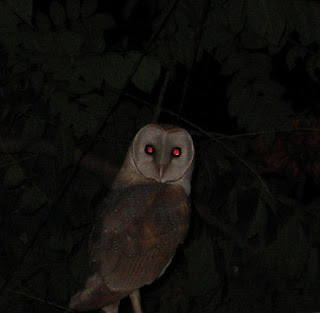 Night Thing
I see that I’ve become a night thing now,
that even lust burns out, both song and vow.
When candles gutter down too many times,
when stuttering love has used up all her rhymes,
when darkness sucks out colors' hoarded breath;
then I the night thing learn the face of death.
I even put it on to try the fit;
so tight, so stiff, but I’ve grown used to it.
I take it off when daylight pales the sky
but find it needful under night’s ink eye.
Two dogs and I come haunt this vacant lawn
where two fires burned but one of them is gone.
The mouse cries shrill and then the barnowl hoots.
Age clicks the thirty eight before she shoots.
May 2012
Posted for   FormForAll   at dVerse Poets Pub
Samuel Peralta's Challenge: The Clarian Sonnet
The Clarian sonnet is named after 18th century English poet John Clare, and consists of seven rhymed couplets in iambic pentameter.
Image: Owl, by $holydevil on flick'r
I have cropped this photo which is shared under a Creative Commons Attribution Only License
You can see the unaltered original here.
Posted by hedgewitch at 7:42 PM