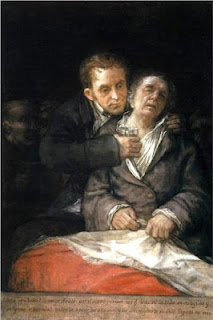 The Strange Serum of Professor Foutre au Cul
It was late, approaching midnight, when Professor Foutre au Cul made his final decision.  The wind through the open shutters wavered the gaslight in its isenglass globe, casting blood dark shadows over the scattered pieces of dirty laboratory equipment, making them seem like instruments of torture, as indeed, in the professor’s case, they were. But, mon dieu! he had no time for that now, not when he was so close.
At last he felt his serum was perfected, the serum that would transform the laboring underclass into willing slaves, obviating the need for expending capitol on wages, or those clumsy robots the dwarves were always bragging about, and which always rusted into oblivion before the warranty expired. Professor au Cul had a bit of a poetic streak, and thought of his potion as "The Foutre au Cul Ultimate Obedience and Indifference Induction Elixir."
He had as yet to come up with a marketing slogan. “Watch Them Drink and Obey!”  perhaps. Or “Save a Fortune on Scullions and Automatons! Make Your Wife, Regardless Of How Formerly Intractable, the Perfect Domestic Slave!” or, alternatively,  “Transform Your Drunken Sot of A Husband Into A Responsible Wage Earner!”
The possibilities were endless.
No matter that the earlier concoctions were a mixed success at best, causing the loss of several typists. He’d been forced to terminate them when they removed their bustles and began a bacchanal procession through the lab, completely indifferent to both social mores and the terms of their employment but alas! no more obedient than ever. While not wholly averse to the former manifestation, it was not the reaction he was looking for.
But at last, after the introduction of tincture of mercury, the reduction of the grain alcohol component and a ticklish adjustment of 27 different herbs and spices, the serum had reached the stage where human experimentation was vital. He was the only one left, and he owed it to Science to finalize his amazing gift to mankind by making himself the last trail subject. He had no fear. He knew his process was flawless.
He upended the delicate crystal vial, and rapidly drank off six ounces of vile, murky grey fluid. It was only after enduring hours of agonizing bellyache and acquiring a raspberry rash over 86% of his body, including parts best not thought of, that the professor realized he had no way of telling whether the serum had actually worked, as he was already totally obedient to his own every whim, and complete indifference to everything else was a natural trait.
Back to the drawing board. Perhaps this time, something in a little blue pill?
May 2012
Posted for    real toads
Kerry's Wednesday Challenge: Steampunk
A bit of a departure for me; normally I find writing prose to be like pulling teeth, but in this case, the thing refused to be a poem, (I linked an older one of those if preferred) so there you go. Apologies for the length--it didn't want to be short, either.
Optional Musical Accompaniment